Although the introduction of the four-year normative degree is still some four years away, the need to develop a framework for this complicated transition is underway to ensure City University of Hong Kong (CityU) is perfectly placed to implement and contend with the necessary changes.

At the University Development Forum held on 20 March, the University shared with staff and students the progress made so far in developing the framework for the transition to a four-year normative degree structure and exchanged views on the issue.

The Senate approved the four-year curriculum structure in 2006 to provide the framework upon which the University will design the new four-year curriculum. To assist faculties and schools with implementation of this new degree structure, the Four-Year Curriculum Implementation Group has completed a draft consultation document for the new structure of undergraduate degrees, which will replace existing regulations. 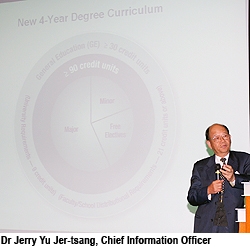 Among some of the concerns raised by those in attendance were issues related to dealing with the substantial influx of a double cohort of students in 2012, when the four-year degree is introduced, including space limitations, staffing requirements and the logistics of handling the new admissions.

“It was a good exchange of views on what is obviously a work in progress,” said Professor Lam. “There are still several stages to go through before we seek Senate approval on the structure of undergraduate degrees and we will be holding more forums of this nature along the way,” he said.

In regard to space, a challenge confronting all Hong Kong universities, Dr Yu pointed out that the two new buildings due for completion in coming years, namely the Multi Media Building (MMB) and the Community College of CityU (CCCU) Building, would be vital in easing the load.

“These two buildings, together with the Academic and Administration Building that is pending government approval, will add 60 percent extra space to our campus. Plans are also underway to recruit more than 200 staff,” said Dr Yu. 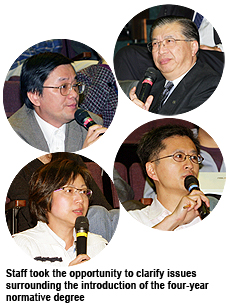 The revised consultation document on The Structure of Undergraduate Degrees will be sent for Senate in May this year after views have been sought and consolidated from faculties and departments. The proposal for the co-curricula structure will be put to Senate in June 2009.

In addition, students must choose a minimum of 30 credits of GE courses. They should, however, make sure that they satisfy the credit unit requirement of the University and their respective faculties/ schools. They should consult their academic advisors to ensure the courses chosen complement their major studies.