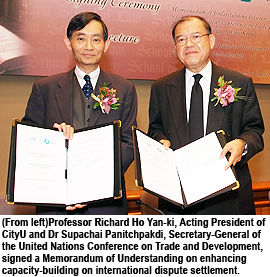 of City University of Hong Kong (CityU) has signed a Memorandum of Understanding (MoU) with the United Nations Conference on Trade and Development (UNCTAD) on 10 March on enhancing capacity-building on international dispute settlement. This MoU on international dispute settlement is the first agreement of its kind UNCTAD has signed with a university in the Asia-Pacific region.

Dr Norman Leung Nai-pang, Pro-Chancellor of CityU, said that in facing the challenges of internationalisation, Hong Kong was striding towards becoming a legal hub in regard to dispute settlement. "CityU is dedicated to providing students with high quality legal education to meet an increasing demand for experts in dispute settlement, to better serve the community and the region," Dr Leung said. 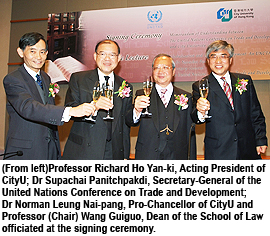 "With Hong Kong's CityU working towards becoming a regional hub for professional education and training in this area, I believe that this MoU will reinforce our common aim to enhance expertise on dispute settlement in international trade, investment and intellectual property, and on international commercial arbitration in the Asia-Pacific region. I look forward to a fruitful collaborative relationship," Dr Supachai Panitchpakdi, Secretary-General of the United Nations Conference on Trade and Development said.

During the ceremony, Professor (Chair) Wang Guiguo, Dean of the School of Law said the School of Law was very honoured to have the opportunity to cooperate with UNCTAD. "On behalf of the School, I would like to express my sincere gratitude to UNCTAD for their trust and support as well as their recognition of our contribution to legal education and professional training," he added.

UNCTAD is the principal organ of the United Nations for the integrated treatment of trade and development and interrelated issues in the areas of finance, technology, investment and sustainable development.

The UNCTAD Project on Dispute Settlement promotes effective integration of developing countries into the multilateral trading system through development and dissemination of specialised information, promotion of research on related international and regional issues and through promoting the rules and practices of institutionalised dispute settlement.