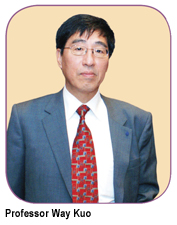 Professor Way Kuo, President-designate of City University of Hong Kong (CityU), was elected a Foreign Member of the Chinese Academy of Engineering (CAE). The election recognises Professor Kuo’s “contribution to the field of reliability design for microelectronics products and system,” according to President Xu Kuangdi of CAE.

The Chinese Academy of Engineering, established in 1994, is the most prestigious and authoritative advisory institution in China’s engineering science and technology fields. CAE elects new members every two years. Scholars and specialists with foreign citizenship who have made significant contributions to the cause of engineering and technology of China and enjoyed high academic standing internationally can be nominated and elected as Foreign Members. Currently, CAE has a total of 721 Members with six from Hong Kong and 34 world-wide Foreign Members.

“Professor Kuo’s election to the academy is a great honour for CityU as Professor Kuo, an internationally-recognized professional and academic, will lead our university to meet new challenges and scale new heights in the next five to 10 years,” said Professor Richard Ho Yan-ki, Acting President.

Professor Kuo said he is looking forward to joining CityU. He also expects to join the efforts of others in making contributions to research and the education of higher learning.