On 7 December, the Court, the supreme advisory body of City University of Hong Kong (CityU), held its first meeting.

The Court is one of the three statutory bodies, together with the Council and the Senate, established under the CityU Ordinance, which is responsible for providing advice and support on the general policy and work of the University. 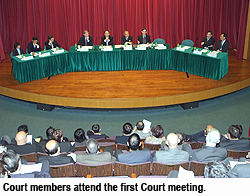 Dr Norman Leung Nai-pang, Pro-Chancellor of CityU, who presided over the first Court meeting on 7 December, welcomed members to the meeting and explained the role and functions of the Court as the supreme advisory body of the University. He added that promoting the interests of CityU was arguably the most important function of the Court. "The Court provides an opportunity for friends of the University to take an interest in the affairs of the University and get involved in some of its activities. I am happy to see that we can help with extending the network for collaboration and association with the wider community for CityU," Dr Leung said.

He further remarked that "(CityU) ranks among the top 150 universities worldwide, which is a splendid achievement when one considers the number of well-established and reputable universities in the world. I call upon members of the Court to continue promoting CityU not just in Hong Kong, but also in the international arena." 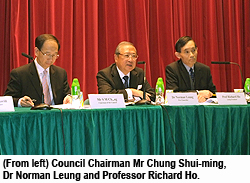 The Acting President Professor Richard Ho Yan-ki added "Over the past four years, only four universities in Hong Kong have managed to remain in the league table's top 200, and CityU is one of them."

In his report to the Court, Professor Ho thanked the Council for its support and leadership. With the support and help of members of the Council, staff and students, the University had built a strong foundation to meet the challenges of the years ahead.

Professor Ho then reported on some of the University's achievements and works in progress. He said the quality of incoming students had been improving and that CityU now held fourth place in terms of the entry score requirements. He added current students were winning more international prizes. An impressive 97% of graduates were gainfully employed.

The University is working earnestly to address two major aspects of the education programmes at CityU - language and establishing a global mindset. "We are actively seeking partnerships with overseas universities/organisations to prepare programmes that can help instil a global mindset in our students. The Language Companion Course, an internet-based English mentoring scheme aims to improve students' English proficiency would benefit around 5,000 students from next year. Our vision for 2012 is one student, one language mentor," Professor Ho said.

He pointed out that CityU had also achieved excellent results in the 2007-08 Research Grants Council funding exercise, and that both research students and alumni continued to register outstanding performances in their research and academic work.

Regarding campus development, Professor Ho said the Multi-media Building and the Community College of City University (CCCU) Building were proceeding rapidly, while other capital projects, such as the Academic and Administration Building and Student Residence Phase 4, were in the pipeline. Student Residence Phase 5 was in the planning stage and would provide additional hostel bed places for students, he added.

He also reported that the Council had approved 112 colleagues deployed to CCCU to return in July 2008 and work on top-up programmes at the School of Continuing and Professional Education (SCOPE), re-aligning the focus of CCCU and SCOPE to the long-term benefit of the University.

Professor Ho added that the Council had appointed Professor Way Kuo as the new President of CityU to lead the University to new heights.

In his closing remarks, Professor Ho expressed his heartfelt gratitude to the 70 attendees for their care for the University. "Without you, we would not have been able to make it and see the light at the end of the tunnel. You are our lighthouse," he said.