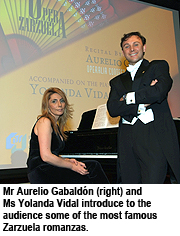 Mr Aurelio Gabaldón, a Spanish tenor and Operalia’s 2007 winner, took staff and students at City University of Hong Kong (CityU) on a journey through a repertoire of some of Spanish opera’s finest moments, accompanied by the pianist Ms Yolanda Vidal, in a recital held on campus on 10 December.

Under Placido Domingo’s artistic aegis since its inception in 1993, Operalia has become one of the most important international contests for opera singers of all voice categories in the early stages of their career. Mr Aurelio Gabaldón won First Prize this year in the category of Zarzuela, a typical Spanish operatic genre. 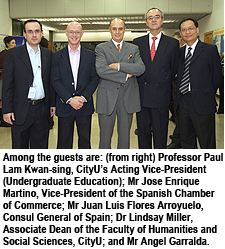 The recital was co-organised by CityU’s Cultural and Sports Committee and Department of English and Communication and the Consulate General of Spain in Hong Kong. It was sponsored by the Spanish Chamber of Commerce in Hong Kong. It is an example of the University’s concerted effort to nurture an internationalised campus culture for its students. CityU is the only tertiary institution in Hong Kong to host Mr Gabaldón on stage.

The recital not only offered a delightful combination of some classic Spanish opera arias and songs written for a lyric tenor, but also introduced to the audience some of the most famous Zarzuela romanzas.

Aside from bringing the emerging Spanish tenor to perform on campus, Mr Angel Garralda, a teaching fellow in the Department of English and Communication and the coordinator of the recital, has actively promoted various Spanish learning experiences for CityU students. 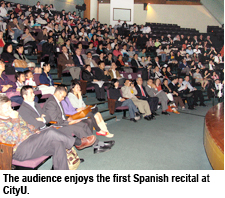 “Spanish is one of the three most popular languages in the world. If students speak English, Putonghua and Spanish, they will be able to communicate with almost two thirds of the world population,” Mr Garralda said.

CityU offers a Spanish minor programme to students from all disciplines. Apart from regular exchange and internship programmes that enhance the understanding of Spanish culture and business environment, the Department is also planning to organise a language and culture immersion programme for Spanish, French and German minor students.

“We will select 10 students from each of the three minor programmes and grant them a $10,000 scholarship to experience local life in Europe during the summer break,” Mr Garralda added.

The University also promotes Spanish culture and language to the community. CityU is co-hosting a Spanish learning radio programme with the Radio Television of Hong Kong (RTHK). The programme “Ole Ole Spain” teaches the audience conversation Spanish and cultural practices through real-life scenarios. Besides Mr Angel Garralda, the hosts of the programme also include Mr David Santandreu, Senior Lecturer in the Division of Language Studies, CityU; Mr Juan Chia, a Spanish-speaking Juris Doctor student from CityU’s School of Law; and Ms Serina Ha Miu-yin of RTHK.