Film is not only a popular medium but also a rich and multi-faceted art form. “Cinema: East and West”, a new General Education (GE) course to be offered by City University of Hong Kong (CityU) in the second semester of 2007-08, will enable students to appreciate the art of cinema from various perspectives and enhance their understanding of historical and cultural issues by studying films. 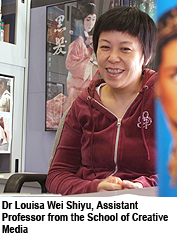 Dr Louisa Wei Shiyu, Assistant Professor from the School of Creative Media, who is responsible for coordinating this GE course, said, “Many people like watching movies and are attracted by the story or special effects. However, a movie is a combination of moving images and music. It represents a unique culture. I hope this course will guide students to understand film from different perspectives.”

The course will introduce important concepts, movements and trends of the industry since its inception in 1895. Through the course, students will not only have a deeper understanding of the art of cinema, they will also learn to analyse the unique culture and ideology of films and study how cinema of the East and the West influences each other.

“Film originates from the West. Many people believe films in the East are influenced by the West.” Dr Wei said, “But in fact, throughout the history of film, the East and the West have had a reciprocal influence. The new GE course aims to deepen students’ knowledge of Eastern and Western cultures and guide them in their comparative studies.”

The course is specially designed for students who have not previously studied cinema or media. All it requires is an interest in cinema. This introductory course is worth three credits. Major learning activities include lectures, tutorials and viewings. Students will watch clips of important films from different periods for discussion. Assessment is based on film journals, online discussion and exam. To encourage in-depth learning, the exam will be take-home and open-book. 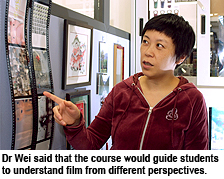 Upon completing the course, students should be able to appreciate cinema from both the narrative and cultural perspectives, describe and discuss different genres of film and acquire the essential vocabulary and concepts of the art and history of cinema. Dr Wei encourages students to take this course if they wish to pursue further studies in film and media.

CityU will offer six GE courses in the second semester. In addition to “Cinema: East and West”, the other five courses include “Chinese Cultural Heritage in Modern Perspective”, “Identity and Citizenship in a Globalised World”, “Science and Technology: From Past to Future”, “Rational Thinking and Creative Ideas”, and “Information Management and its Social Impact”.