Tomy Choi Chi-chung, a 2007 graduate of BA (Hons) in Creative Media from the School of Creative Media at City University of Hong Kong (CityU), garnered awards from overseas and the territory this year. His interactive installation artwork "Meta-fishpond" won him a Silver Award in web video from the international W3 Award, and an Award of Excellence in the new media category of the 2007 Hong Kong Designers Association Award. It has also attracted the interest of one of the commercial corporations to install it as part of its interior design. 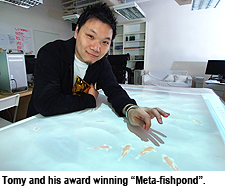 Tomy created the "Meta-fishpond" when he studied in the School of Creative Media, with his inspiration coming from the fishpond located at the Chinese Garden of CityU. He builds a virtual fishpond of carps on the floor making use of a projector, creating a unique combination of the virtual world and reality. When visitors step into the pond, the carps will follow their movements, triggering an interactive effect. They can even feed the carps or add carps into the pond by using PDAs.

The W3 Award is the world's first major competition for website designs, with the objective of recognising outstanding works of creative website design, internet marketing and web video. With members of the International Academy of the Visual Arts as the adjudicators, the competition received 2,700 entries this year. Tomy won the award with his web video that showed the production process of his fishpond and the interaction between visitors and the "fish".

The Hong Kong Designers Association Award has been organised by the association since 1975 to honour outstanding design work in Hong Kong and the Asia Pacific Region. As one of the most important design awards in the region, world-renowned designers have been invited as adjudicators for categories including graphic design, product design, spatial design and new media. From more than 1,700 entries this year, only 250 outstanding works received awards. 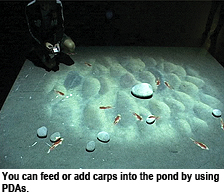 Tomy was very excited to be amongst the winners. "This demonstrates new media art is being more recognised and valued by society," Tomy said.

The installation art work was once on display at the Graduation Show of the School of Creative Media and at the Single-Screen-Based Interactive Media Work Exhibition of the 12th Hong Kong Independent Short Film and Video Awards, where it attracted visitors' attention and the interest of commercial corporations. A Macau restaurant has incorporated this interactive installation in its interior design.

Tomy has a dedicated passion for media design. After completing his Associate Degree in Digital Visual Design at the Community College of City University, he continued his study of BA (Hons) in Creative Media at CityU's School of Creative Media, concentrating on New Media and Interactive Studio. He was grateful to the School of Creative Media for equipping him with comprehensive professional knowledge. He said the programme in the School was very practical and he specifically benefited from the image processing technique he learnt.

"The programme of the School has not only inspired my creativity and arts sensibility, but also helped me master the media production skills necessary for design works," Tomy said. He added the School of Creative Media provided opportunities for students to foster links with industry as it had good connections with both local and international professionals. It helped Tomy to keep abreast of the latest trends in the field.

Tomy was pleased that he could apply his knowledge and skills in the workforce. After graduation, he and his friend set up a new media design company to provide services of new media project management and product design, with the assistance of Hong Kong InnoCentre. He feels the School of Creative Media has been a great help to his career development and has enabled him to fully utilise his potential.