Under a beam of moonlight 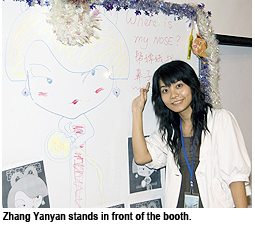 "A bright moon rises from the sea; Separated in different places, yet it's the same moon we can see."

These two lines of Chinese verse just croped up in my mind when I saw the poster hanging outside the Student Hostel Block 8 on my walk to my room via the pedestrian flyover. Depicted on the poster was a picture of a group of children in colourful dresses holding a long rope and playing in a circle, against the backdrop of a rising, bright yellow moon. It inevitably made me think of my family, especially in light of the approaching Mid-Autumn Festival, which is supposed to be about families enjoying a celebration. So how could I, as one of many students studying away from home, be relieved of the homesickness that accompanied this festive season?

Four years have passed since I arrived in Hong Kong. During these four years, I celebrated the Mid-Autumn Festival at CityU's student hostels almost every year - from my first one living in the Student Hostel Block 8 as a graduate student, to my time in the undergraduate hostel as a residence tutor, through to now at the graduate hostel again as a residence tutor. I have joined the Mid-Autumn Festival gathering hosted by other students, and I have organized one for undergraduate students. For this year's evening gathering, there was a host of programmes listed on the poster: performances of Chinese orchestra, dragon and bamboo dance, displays of Chinese face painting and creatively-designed lanterns, and a dessert of sweet dumplings. Reading the list, I eagerly looked forward to the arrival of 24 September. 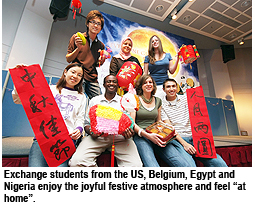 On that evening, colourful lanterns adorned the hall, all looking resplendent with riddles written on paper swinging beneath them. Also on show were colourful balloons, banners and decorative lights. The booths of each hostel were moved into the multi-purpose hall for fear of possible raining. The hall was so beautifully decorated that it didn't look crowded at all and made me feel as if I were in a carnival. Our hostel hosted a game "Drawing a Nose for Chang'e" which was designed for small children but was very well received by hostel students. 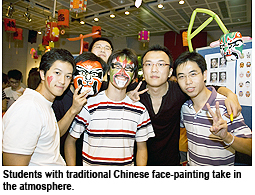 As the cartoon smiles spread and brightened the atmosphere, so too the sky brightened up. There was no rain, so many of the booths were moved to the lawn outside the hall. A colourful crowd, whether reflecting the blend of different cultures or just the colours painted on their arms or faces, continued to visit the booths in an exciting mood. With smiling faces mirroring those of children on the poster, the crowd had seemingly revisited its happy childhood and collectively dispensed with any feelings of homesickness.

Suddenly, someone called, "Look, how beautiful is the moon!" Then everyone looked up and watched the radiant full moon, as the background music was played by the Chinese orchestra and exciting drum beats accompanied a lion dance.

The most serene people are those with an innocent mind, and the truest emotion is happiness. These two special features, innocence and happiness, can break through barriers erected by language or race. I believe the students who came to this gathering all enjoyed the evening under the timely full moon. Although we came from different countries and places, we indeed fulfilled the Chinese custom of getting together to celebrate this joyful festival.