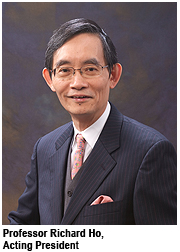 “All the 112 colleagues will return to work at CityU on University superannuable terms. No one will be left behind,” said Professor Richard Ho Yan-ki, CityU’s Acting President. “Bringing them home meets the wishes of the staff concerned.”

The proposed plan calls for the 112 staff to engage in top-up programmes run by the School of Continuing and Professional Education (SCOPE) on 1 July 2008. The proposal has yet to be approved by the University Council.

“The proposal actualizes the University’s commitment towards the substantiation system,” said Professor Ho. “It will also enable CCCU to operate with a clean slate when it turns completely self-financing on 1 July 2008.”

Professor Ho added that the outstanding deployment issue will be solved with a financially viable plan and that the University will be relieved from a heavy financial burden. An option in an earlier plan would have obliged the University to pay perpetually for the benefits of staff deployed to work at CCCU.

“The latest plan is a well balanced initiative benefitting the four parties concerned,” Professor Ho said. “The deployed colleagues win because they get what they want - job security when they return to work at CityU on superannuable terms. The CCCU wins because the plan benefits the college’s long-term development without the responsibility for the payroll of the superannuable staff. The SCOPE wins because it will have the talent to develop top-up programmes,” he added. “Last but not least, the University wins because it signals the University’s commitment to honour the substantiation system in totality which is much treasured by the staff concerned. Moreover, it also has the opportunity to realign the foci of CCCU and SCOPE, which will benefit the University in the long-run.”

In future, SCOPE will concentrate on top-up programmes and adult education, while CCCU will focus on sub-degree education, including running the Yi Jin programmes.

The realignment will benefit CCCU’s long-term development because it allows the College to employ new talent to start new programmes. “Since the bulk of the existing 260 College teachers will not be affected by the realignment, plus the injection of new blood, we believe the quality of its existing programmes can only improve,” said Professor Ho. “CCCU students can be well assured that none of the existing programmes will be cancelled due to the transitional arrangement,” he added.