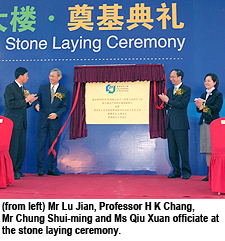 City University of Hong Kong (CityU) held the stone-laying ceremony for the CityU (Shenzhen) Research Institute Building on 3 April. The event marked another milestone for CityU in developing its base for applied research, professional education and incubation on the mainland. 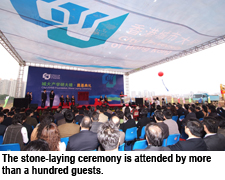 The ceremony held at the Building's site in the Shenzhen Virtual University Science Park was attended by more than 100 guests who came to share this memorable moment in CityU's history.

"Hong Kong has strived to become a regional hub for higher education," said Mr Chung in his opening remarks. "It attaches great importance to developing intellectual property and a knowledge-based economy by nurturing professionals and encouraging academic and scientific research. CityU contributes to this by upholding its missions to provide quality professional education and promote applied research." 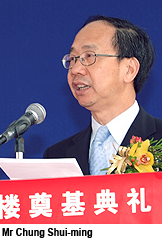 He pointed out that CityU had established three applied R&D centres in the Park since 2000. In an attempt to further integrate and expand its research work, the University then decided to develop a branch in Shenzhen as a base for its applied research, professional education and incubation on the mainland.

"With the support of the Shenzhen Municipal People's Government, CityU can turn its vision into a reality. We can take advantage of Shenzhen, which brings together talent from all over the country, to establish a base for applied research, professional education and incubation, further boosting educational and economic development in Shenzhen, the Pearl River Delta Region and the mainland," Mr Chung said.

Ms Qiu Xuan, who gave a speech on behalf of Mr Liu Yingli, Executive Vice-Mayor of the Shenzhen Municipal People's Government, said CityU had chosen the right time, the right partner and the right place to put forward its mainland development plan.

She said Shenzhen was a gateway to mainland China and a long-time partner of CityU. CityU had chosen to establish its base in Shenzhen at a time when the Central Government valued very much the Shenzhen Virtual University Park project and when Shenzhen and Hong Kong Governments were working hand in hand to bring the project to fruition, she added.

In 2005, the Shenzhen Municipal People's Government granted CityU a 5,300-square-metre site to establish a base in the Park. Among the four local universities participating in the project, entitled "Incubation-Education-Research Base for Hong Kong Universities", CityU is the first to start construction.

"It is inevitable that CityU should get closer to Shenzhen when both Shenzhen and Hong Kong enjoy a very fast pace of development, a wealth of professionals, and great potential for further growth," he said.

He praised colleagues who, against all odds, made inroads into the mainland. "I must thank every one of you who has worked so tirelessly for CityU to make it a truly top-notch university, one which thrives on delivering professional education and excellent research," he said.

CityU has achieved a great deal in its mainland development in recent years, laying a concrete foundation for its base in Shenzhen. The erection of the Building represents a milestone in the University's development, a promise to further excel in professional education and applied research and to bring the development of high-tech industries to new heights, Professor Chang continued. 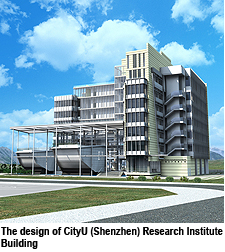 The Building, with a gross area amounting to 16,060 square metres and a net area of 8,100 square metres, is scheduled to open in mid-2008. With an estimated total investment in construction, equipment and facilities of over $100 million, the Building will be able to accommodate 2,000 students at any one time. It will feature three large lecture theatres, laboratories, project offices, classrooms, an executive training centre and state-of-the-art amenities, all of which will be used for incubation projects, professional education, the training of research students and applied research activities.

Having commissioned Aedas as the architectural consultant for the project, CityU plans to construct an environmentally-friendly high-tech Building that will be an outstanding landmark in the Park.

Upon completion of the construction, the applied R&D centres and eight CityU subsidiary companies that apply the University's research accomplishments will extend their operations in the Building. CityU Professional Consultancy Services Centre will offer various types of consultancy services to businesses in the Pearl River Delta Region and neighbouring areas, while CityU Technology Transfer Centre will transfer research to industries through patents and other means.