During the 10-day trip from March 15th to 25th, the CityU delegation visited six major universities in the Czech Republic, Poland, Hungary, Bulgaria and Romania.

Dr Zhu Guobin, Director of the External Liaison and Cooperation Office, said the trip achieved four objectives—extending CityU's international partnership networks through comprehensive academic exchanges between the universities; broadening the internationalization of the CityU campus through student exchange schemes; adding more overseas destinations for CityU exchange students as part of the University's preparations for the new four-year curriculum; and exploring opportunities for CityU to recruit students in Eastern Europe.

Aside from signing seven agreements on institutional collaboration with Warsaw School of Economics in Poland, Eötvös Loránd University in Hungary, University of Bucharest in Romania, and Sofia University St. Kliment Ohridski in Bulgaria, CityU's Faculty of Business, Faculty of Humanities and Social Sciences, and Department of Mathematics all identified opportunities to strengthen future cooperation with Eastern European institutions during the trip. 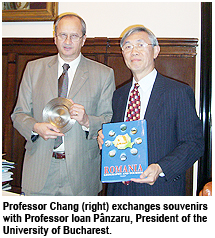 For historical and geopolitical reasons, tertiary institutions in both Eastern Europe and Hong Kong have traditionally emphasized exchanges with institutions in North America and Western Europe. Globalization has awakened their interest in each other. CityU's trail-blazing visit to Eastern European countries, which only started to open fully to the world after the end of the Cold War, has benefited the internationalization of the University and broadened the horizons of both sides.