Seven students from the BBA (Hons) China Business programme at City University of Hong Kong (CityU) have compiled a report on the benchmarking of operation standards for call centres in China for the Ministry of Information Industry of China by applying what they have learnt at CityU.

The first of its kind in China, the detailed research project on the operation and management of call centres will be used as a benchmark by the industry. CityU was the only institution invited to provide academic support.

Conducted between June and September of last year, the research included collecting information from the mainland call centre industry, designing questionnaires, conducting field work in the mainland and interviewing scores of industry experts and the management of many mainland corporations. Then the students had to organize all the information and write up the report.

The students all agreed that they had put into practice what they had learned at CityU. "Although at first we knew very little about the operation of call centres on the mainland, the knowledge we have learned in class 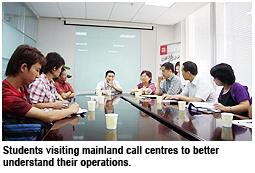 about the management culture and workflow of mainland corporations has helped us," Kevin said.

Dillys felt excited about interviewing industry experts. "Sometimes we had to finish an interview within a very short period of time," she said. "So time management has been very important. The interview skills and Putonghua that I have learned in my programme have been very useful, too."

Another valuable experience has been learning not to give up too easily. "If you persevere, you have a better chance of success. I was turned down when I tried to contact some mainland corporations, but with more resolve and a professional attitude, I finally earned their respect," Kevin explained.

Ms Bi Zili, an instructor in the Department of Marketing, said the most valuable part of the project was to deepen students' understanding of the management culture and operation of mainland corporations through practical experience.

The research report of the students is entitled "2007 Report on Benchmarking of Operation Standards of Call Centres in China", and it was published in February by the Ministry of Information Industry of China.