Liang Xiangdong, a City University of Hong Kong (CityU) student on the Master of Philosophy in Applied Mathematics programme, has been awarded full scholarships by world-class universities MIT, UC Berkeley and Oxford for further studies towards a doctorate. All three are among the world’s top institutes in applied mathematics. Only eight students are accepted globally each year for MIT’s doctorate programme in applied mathematics.

Liang Xiangdong attributed his success to CityU’s strong faculty, the close interaction between teachers and students, the strong endorsement from his supervisor, the advanced campus hardware and facilities, the opportunities provided by the international exchange programmes, the scholarships for outstanding mainland students, as well as his own hard work and active participation in major national and overseas mathematics competitions.

“CityU’s Computing Mathematics programme has provided me with solid training in applied mathematics. This has prepared me well for further studies overseas,” Liang Xiangdong said. “If I had not come to CityU, I am sure that I would not have been admitted to top universities such as MIT.” 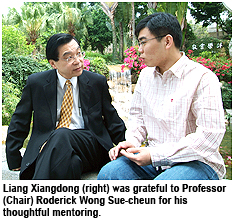 After his first year in Jilin University, Liang Xiangdong came to study at CityU five years ago. He continued his studies towards his Master of Philosophy in applied mathematics at CityU after completing his Bachelor of Science (Hons) in Computing Mathematics.

“The standing of a university is based on the excellence of its students, just like a company’s brand reputation relying on its products and services,” Professor Wong said. “Liang Xiangdong is CityU’s pride and represents the quality of our education.”

The deeper Liang Xiangdong digs into mathematics, the more fascinated he becomes. He describes his experience as “seeking and finding joy in mathematics”. The mathematical symbol epsilon “ε” often gives students a headache. But not Liang Xiangdong. In his eyes, it looks like a warm smile that pulls him further in. 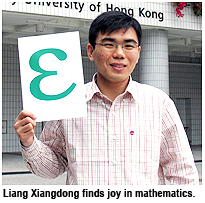 Driven by enthusiasm, Liang Xiangdong and his CityU classmates have competed successfully in major mathematical contests. They won first prizes in the modeling contests held by the Consortium for Mathematics and its Application and the China Undergraduate Mathematical Contest in Modeling. With his brilliant academic performance, Liang Xiangdong won the opportunity to study at Carnegie Mellon University in the US for one semester as an exchange student towards the end of his undergraduate study. All these achievements have paved the way for his successful application to world-class universities to pursue further studies towards a doctorate.

“Good grades are the minimum requirement. Quite a few students have won major contests, ” Liang Xiangdong pointed out. “What really made the difference is the academic stature of my supervisor Professor Wong and the content of his recommendation letter.” From the bottom of his heart, Liang Xiangdong thanked Professor Wong for his mentoring. “Professor Wong is demanding on the students but also very considerate. He changed the course of my education. I feel extremely fortunate to have such a great teacher as well as supportive friend. ”

Professor Zhou Dingxuan, Head of the Department of Mathematics, and Dr Lu Ya-yan, Associate Professor in the same Department, who received his PhD from MIT, also wrote letters of recommendation for Liang Xiangdong.