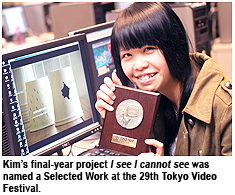 A recent graduate from the BA (Hons) Creative Media programme of the School of Creative Media at CityU has won a top honour at the 29th Tokyo Video Festival.

Kim Chim Lok-man’s final-year project I see I cannot see was picked as a Selected Work, one of only 100 entries given either an Excellence Award or named a Selected Work. Altogether 3,400 entries were submitted from 55 countries and regions, including the US, UK, France, Japan, South Korea and Singapore. Hong Kong entered 150 projects. 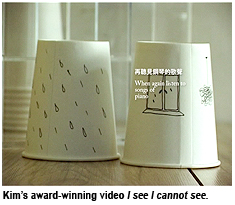 At ten minutes in length, I see I cannot see exquisitely combines hand-drawn animation with video images. Inspired by an unforgettable memory, the film depicts a process of self-searching and confirmation through portraits of different objects.

The CityU graduate said gaining this level of recognition was great encouragement, adding that her family now would better understand her studies and continue to support her development in this field. “I feel very lucky to win a prize at my first attempt in an international competition,” she said. “It has really boosted my confidence and I really want to develop my career in this area.”

Majoring in Critical Intermedia Laboratory, Kim said the School of Creative Media had equipped her with knowledge about and applications of different media, and it had inspired her to think creatively from different angles. 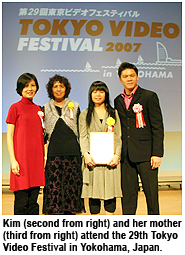 She thanked her supervisor Mr Ip Yuk-yiu, Assistant Professor in the School of Creative Media. “He always shares his views with us and talks about his extensive experience in the industry,” Kim said. “This has really helped my development.” He encouraged his students to get more exposure to the world and to share local creative work with different cultures, she added.

Mr Ip spoke positively about Kim’s achievements. “Kim’s work gives me a feeling of freshness,” he said, pointing out that Kim’s success at the Tokyo Video Festival demonstrated the extent to which the creativity of students studying in the School of Creative Media was being recognized by the local community and overseas countries.