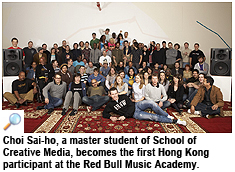 A postgraduate student of City University of Hong Kong (CityU) has been accepted by the world-acclaimed Red Bull Music Academy as its first participant from Hong Kong. Choi Sai-ho, a student of Master of Fine Arts in Media Design and Technology of the School of Creative Media, has won one of the only 60 places at the Academy from an intense competition of 2,422 entries worldwide. He went to Melbourne in October this year for two weeks to share with other participants his audio-visual presentation. The 60 participants were divided into two groups, each attending a two-week session.

Choi Sai-ho is the only one who studied audio-visual music among the 30 participants at the Academy's second session this year. "I love audio-visual," he says, "as it can offer audience both music and images at the same time with more room for imagination." 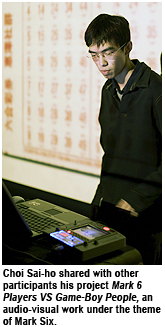 The Red Bull Music Academy offers an international platform for participants with different backgrounds and cultures to share their ideas and thoughts about composing different types of music. Choi Sai-ho has shared with other participants his final-year undergraduate project Mark 6 Players VS Game-Boy People, an audio-visual work under the theme of Mark Six.

"One of my major objectives to go to the Academy," he says, "is to introduce Hong Kong culture to people from other countries." Moreover, he says, the two weeks at the Academy had also broadened his views and given him an invaluable opportunity to study different types of music from different places, which would be a rich source for inspiration in his future creative work.

To compose an audio-visual work, one needs to have excellent knowledge of both audio and visual arts. To Choi Sai-ho, the musical part is not difficult at all, since he started to learn to play violin at the age of eight and has already attained performance level in playing violin. The undergraduate study at CityU's School of Creative Media has deepened his understanding of visual arts. He expresses that the diverse training and creative freedom provided by the School has a profound impact on him. Moreover, the support and opportunities offered by the teachers at the School have helped him determine the direction and style of his creative works. 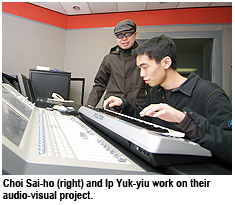 One of his mentors, Mr Ip Yuk-yiu, Assistant Professor of the School, appreciates very much Choi Sai-ho's musical talent. Not only are they teacher and student to each other, but also good friends, who had been invited by Indiana University in the US to participate in the Perform Media Festival in September 2006. Mr Ip Yuk-yiu worked on the visual part and Choi Sai-ho worked on the musical part of in their presentation.

Mr Ip Yuk-yiu expresses that the School encourages students to go abroad for exchanges and performance. "We believe that students should make efforts to broaden their views and gain international recognition," Mr Ip Yuk-yiu says, adding "They should seize the opportunities to go internationalized."

Choi Sai-ho hopes to introduce audio-visual music to the people in Hong Kong in the near future and add yet another choice for the local music lovers.

About the Red Bull Music Academy

On its 9th anniversary, the Red Bull Music Academy took place in Melbourne this year. Each year, the Academy invites different musical talents from all over the world to participate in its two-week workshop in a specially-built venue for exchange of musical knowledge and ideas. Moreover, it invites guest lecturers to share their experiences on music with the participants.