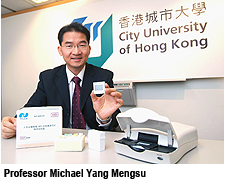 Genetel Pharmaceuticals Ltd, a subsidiary company of City University of Hong Kong (CityU), has been awarded the “Technological Achievement Grand Award” for its cervical cancer diagnostic technology in the 2006 Hong Kong Awards for Industries. CityU is the first tertiary institution which has its subsidiary company to receive the Grand Award.

A research team led by Professor Michael Yang Mengsu, Executive Director of the company and a professor in the Department of Biology and Chemistry at CityU, has developed a DNA diagnostic technology for the early detection of cervical cancer. The product “SNIPERTM-HPV” can detect the human papillomavirus (HPV), a virus which causes virtually all cases of cervical cancer, thus facilitating early treatment.

According to Professor Yang, Pap smear testing, the commonly used diagnosis for cervical cancer in Hong Kong, detects only cancerous lesions and has a relatively low accuracy of 60 to 70%. But this award-winning diagnostic technology helps identify different types of high-risk HPV that are associated with cervical cancer development. Clinical trials suggest the accuracy rate reaches over 99%. What’s more, the cost of testing is one-fourth of similar products developed in the US. 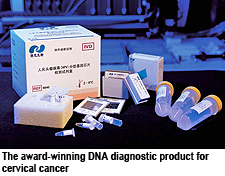 SNIPERTM-HPV was approved by China’s State Food and Drug Administration in May 2006, and it is covered by 5 US and China patents, and is seeking approval from the European Union.

Since joining CityU in 1994, Professor Yang has been conducting research in biochip and DNA diagnostic technology. In line with CityU’s mission to provide professional education and conduct applied research, he believes that “a good teacher should also be a good researcher” who can deliver the most updated knowledge to students.

“I would like to thank CityU for supporting academic staff to conduct applied research, and transfer the outcomes to society,” Professor Yang said. “I would also like to thank my colleagues, students and family because we sacrificed our holidays and private time for the research. But we all have a deep sense of satisfaction with what we have achieved,” he said.

Professor Yang’s research has received several rounds of funding from the Research Grants Council and Innovation and Technology Fund from the Hong Kong Government. The award-winning product has been under clinical tests at the Queen Mary Hospital and Prince of Wales Hospital since November 2006. It will be promoted in local private clinics through a women’s health campaign which will encourage women to take the DNA testing of cervical cancer.

Earlier this year, Professor Yang received two grants totaling RMB 2.2 million yuan from the Shenzhen Municipal Government to establish a key laboratory, as well as to conduct a project on developing new anticancer drugs. “We are now developing a bio-sensor which can test a few types of diseases at the same time and we plan to launch it into clinical testing in a year,” Professor Yang said.

The awards presentation ceremony of the 2006 Hong Kong Awards for Industries, officiated by the Hon Henry Tang Ying-yen, Financial Secretary of the HKSAR Government, was held on 5 February at the Hong Kong Convention and Exhibition Centre.