Two giants of contemporary Chinese literary and cultural studies gave talks at a book launch on 6 February at City University of Hong Kong (CityU). The launch kicked off a series of celebrated lectures on Chinese and Western literature to be held throughout this month.

The launch was for Unexpected Affinities by Professor Zhang Longxi, Chair Professor of Comparative Literature and Translation in the Department of Chinese, Translation and Linguistics.

A highly-popular and widely-published cultural commentator Professor Leo Oufan Lee, Professor of Chinese Emeritus at Harvard University and Professor of Humanities at the Chinese University of Hong Kong, was the guest speaker at the launch. An active intellectual in the modern Chinese cultural scene, Professor Lee publishes in both English and Chinese and contributes to various journals and magazines, including the weekly magazine Yazhou Zhoukan, or Asia Weekly. 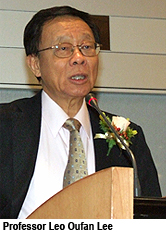 Honouring Professor Zhang’s contribution to the Hong Kong cultural sector, Professor Lee said: “Like the name of the book -- ‘Unexpected’, Professor Zhang always gives us a sense of surprise. Reading his works, I’m always taken by surprise in his astonishing insights and new ways of understanding.”

Among the guests attending the event were Professor Lung Yingtai, former Visiting Professor of the Department of Chinese, Translation and Linguistics, and Professor Richard Ho Yan-ki , CityU’s Vice-President (Undergraduate Education).

Unexpected Affinities is an expanded version of the talks that Professor Zhang gave as part of the prestigious Alexander Lectures at the University of Toronto in 2005. He was the first scholar from outside Europe and North America to deliver the Alexander Lectures, which have been delivered annually since 1929 and are considered one of the most distinguished lectureships in literary studies in North America. 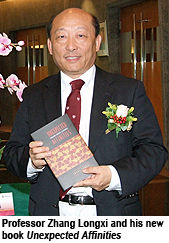 Professor Zhang joined an illustrious line of academics, including Terry Eagleton (2004), Toni Morrison (2002) and Julia Kristeva (1999), who have given the Lectures. “It has been a tremendous honour to be included among these distinguished scholars,” he said.

In Unexpected Affinities, Professor Zhang reviews thematic and conceptual similarities that unite literary and cultural traditions in the East and West by emphasizing affinity over difference and exploring the relationship between the East and West in terms of cultural variations, challenging the traditional boundaries of West-centred comparative literature as a discipline.

“By comparing literatures, we achieve a different perspective and acquire a new sensibility that allows us greater insight and something more than just a single point of view,” Professor Zhang said.

The four-part series of Unexpected Affinities public lectures, to be held on 6, 9, 12 and 14 February, and delivered by Professor Zhang, will examine the idea of cultural incommensurability, cross-cultural conceptual metaphors and symbols and unexpected similarities within texts and ideas across cultures of the East and West.