"Art doesn’t have to be restricted to just classical art," said Mr James Ng Kam-ming, Executive Director of CityU Extension and Chairman of the CityU Gallery Management Committee. "We hope people can have the chance to explore more contemporary art through this exhibition."

Their works present quasi-documentary views that capture angles that are not often revealed. In the "room as pin-hole camera" project, Mr Ching documents the Hong Kong cityscape from the vantage point of rooms rented around town. When making "about 172cm", Mr Pak used his height to document different locations. 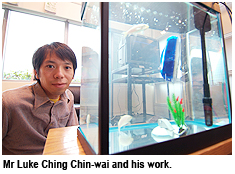 The conceptual energy for Mr Ching's work on show this time comes from the CityU campus as he seeks to integrate students, and staff and other elements. Based on the theme "City", he explores diverse associations to reflect new phenomena. For example, his work "City and Copy" displays a series of imitation works that has linkage with the city.

Mr Ching, born in Hong Kong in 1972, received an MA from the Chinese University of Hong Kong. His major works include "Public Sculpture: Dog Footprint" and "Wet Print: Rainbow", among others. 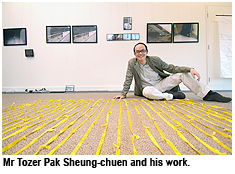 Meanwhile, in his work, Mr Pak explores the area surrounding the University, from Kowloon Tong to Shek Kip Mei. He discovered people, events, activities and other elements when he visited these areas. These interactive activities will be presented in the show.

Mr Pak was born in Fujian in 1977 and moved to Hong Kong in 1984. He graduated from the Chinese University of Hong Kong, and his major works include "Odd One In: Hong Kong Diary" and "See Walk What on 1 July", and so forth. He was awarded the Overseas Exchange Prize by the Macao Museum of Art.

"Two or Three Things About Hong Kong" is a continuing exhibition series that examines Hong Kong from an art and cultural perspective. It has been put together by Ms Sabrina M Y Fung and presented by CityU Gallery. 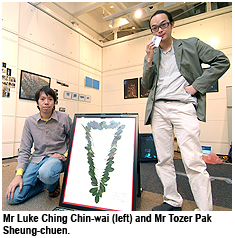 "Two or Three Things About Hong Kong, Part One" in 2003 showcased three leading contemporary Hong Kong artists: Mr Lee Ka-sing, Mr Leung Ping-kwan and Mr Wong Ping-pui. The exhibit focused on a range of real and imaginary Hong Kong issues and was presented through the juxtaposition of poetry, visual images and installations.

The latest exhibition will be on display from 11 January to 22 February at CityU Gallery on Level 6 of the Amenities Building at CityU. Opening hours are from 10am to 7pm every day.

"Memories" by Mui Chong-ki on display at CityU Gallery