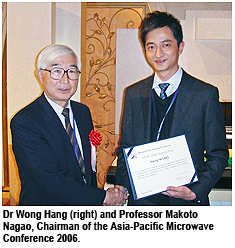 CityU PhD graduate 2006 Dr Wong Hang has won the Top Prize in the student category in the Asia-Pacific Microwave Conference 2006 held from 12 to 15 December in Yokohama, Japan, with his paper "Unidirectional Antenna Composed of a Planar Dipole and a Shorted Patch".

Dr Wong's award demonstrates CityU's achievements in nurturing dedicated applied researchers in the field of wireless communication. Dr Wong is the only participant from Hong Kong to receive this award in 2006.

Dr Wong went from undergraduate to PhD in the Department of Electronic Engineering at CityU. He is currently an engineer specializing in antenna applications in CityU's Wireless Communications Centre.

He said the Department had developed a strong foundation in antenna research and he thanked his supervisor Professor (Chair) Luk Kwai-man, Head of the Department, for his invaluable advice.

Professor Luk is an expert in antenna design, microwave and antenna measurements and applied electromagnetics.

The Asia-Pacific Microwave Conference 2006, sponsored by the Institute of Electronics, Information and Communication Engineers, has been held since 1986. It is the largest microwave conference in the region. This year, 694 papers from 42 countries were accepted, the largest number for one of the conferences in Japan. 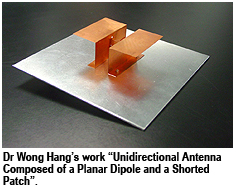 communication market and the advent of multiple interfaces such as 2G, 3G, WiFi, WiMax to the coming 4G. There is now increasing demand for wireless communication systems, and in order to avoid high production costs and pollution, wideband antennas are seen as a solution for different kinds of interfaces. The design of traditional wideband antennas leads to unstable antenna radiation, subsequently causing disruption to the network system.