The websites of the Department of Computer Science and the 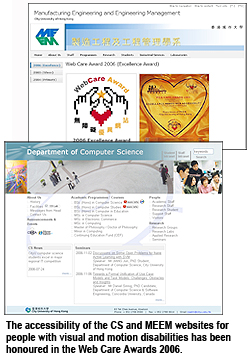 The Web Care Awards are part of the e-Inclusion Campaign organized by the Internet Professional Association to make websites more accessible.

“The significance of the award is that it shows we really care about the impaired,” said Dr Andy Chun Hon-wai, an associate professor in the Department of Computer Science who spearheaded the work that led to the award. He was assisted by Mr Ko Man-hong, an assistant computer officer in the same Department. 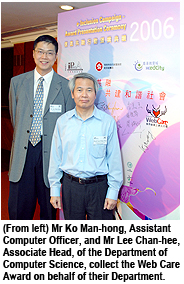 “We make our information accessible to all people with physical disabilities around the world. It is about inclusion, eliminating the divide and access to information and knowledge,” Dr Chun added.

The disabilities include total blindness, colour blindness or being physically limited in movement. “By re-designing our websites to be more accessible, we ensure that people with physical disabilities can conveniently navigate through the website with minimal physical effort,” Dr Chun said.

“For colour blindness, we make sure there are no confusing navigation colours. For total blindness, we re-designed our website so that screen readers can easily make sense of the content to be read,” he added.

Mr Derek Ngan Ting-wai, a computer officer in the Department of Manufacturing Engineering and Engineering Management, said winning the award was very important because it showed that CityU cared about people 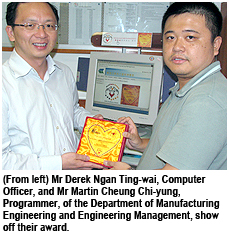 who are often excluded from mainstream society, largely due to inaccessible buildings and services.

This is the first time the Department of Manufacturing Engineering and Engineering Management has received the “excellent” rating. The new website was launched in August 2006 using web accessibility standards, such as Valid HTML and Valid CSS. It won Web Care Awards in 2004 (Primary Level) and 2005 (Silver Prize).

The awards were presented at the e-Inclusion Campaign 2006 Award Presentation Ceremony at the Hong Kong International Trade and Exhibition Centre in Kowloon on 28 October. More than 700 guests from government departments, private organizations, NGOs and schools attended.