Over 1,200 members of staff who have worked at City University of Hong Kong (CityU) for between 10 and 20 years were honoured for their dedicated long-service at a ceremony on 1 November. 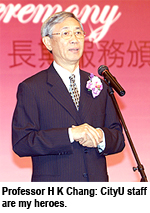 Out of this grand total, 33 staff members who have notched up 20 years of service were presented with their awards by Professor H K Chang, University President, who thanked all those attending for their loyalty and hard work.

Professor Chang, also an award recipient this year, said being the President of CityU had been his longest-serving job throughout his 39-year career, adding that he was impressed by the passion and enthusiasm of colleagues, a commitment that had contributed to the University’s many achievements. 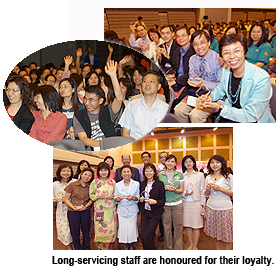 Mr Ronald Wu Wing-cheong, Clerical Officer in the Department of Manufacturing Engineering and Engineering Management, Professor Anthony Cheung Bing-leung from the Department of Public and Social Administration, and Dr Ruth Yee Wing-yu, Associate Director of Student Development Services, expressed their feelings about their 20 years at CityU in a sharing session.

Mr Wu, who has worked in seven different departments during his time at CityU, said he was proud to see the progress that the University had made over the years, in particular its rise in the world rankings. “This advancement is the result of our colleagues’ hard work and commitment,” he said.

Professor Cheung, who left the Government to join the then City Polytechnic in 1986, said CityU had pioneered new academic and research programmes, and a L2-ceremony_e.jpg chievements were made possible because CityU did not have the 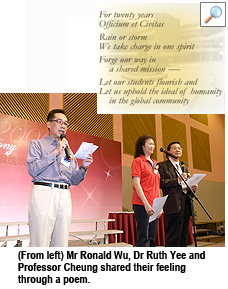 “CityU has given us a lot of opportunities to uncover our potential and it will always be a university by the city, and for the city,” he said.

Dr Yee said the caring culture on campus had kept her committed throughout her career at CityU. “CityU is a big family and everyone here works together for a better future.”

The audience responded with a thunderous round of applause. “Colleagues don’t come here for lucky draws,” Professor Chang remarked. “They come to show their loyalty and dedication to the University.”

An annual event organized by the Human Resources Office (HRO), this year’s ceremony took on a different format as the number of participants tripled to over 1,000.

Dr Ellen Ko Law Yin-lan, Director of Human Resources, said the decision to switch to the new format was taken quickly after receiving the overwhelming response from staff to attend the event, even though that the new arrangement meant additional work for colleagues of HRO and Facilities Management Office.

“The high turnout shows staff members have a strong wish to identify themselves with the University, the original intention of this event. So we did our best to make this event as memorable as possible,” Dr Ko said.