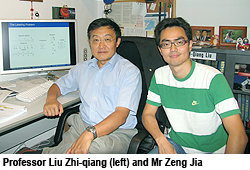 Mr Zeng Jia, a PhD student of the School of Creative Media (SCM), has won the second prize in the Postgraduate Section of the IEEE Region 10 Student Paper Contest 2006. His supervisor is Professor Liu Zhiqiang.

“Not only is Zeng’s project an original idea, but it can also be further developed as a new technology that enhances existing Chinese character input systems in computers, so that users will be able to interact with the media content in a more natural way,” Professor Liu said. 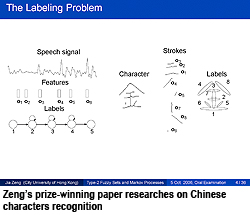 The supervisor-student pair is no stranger to international awards. Last year, also under the supervision of Professor Liu, Mr Zeng won the first prize in the Postgraduate Section of the IEEE Region 10 Student Paper Contest with his research on pattern recognition, after getting the second prize in the Postgraduate Section of a student paper contest organized by the IEEE Hong Kong, with his research on speech recognition.

IEEE stands for the Institute of Electrical and Electronics Engineers. Region 10, which is sometimes referred to as the Asia Pacific Region, is one of the organizations's largest regional bodies. It covers a geographical area stretching from South Korea and Japan in the northeast to New Zealand in the south, and Pakistan in the west.

Mr Zeng was an engineering major at Wuhan University of Technology, and he started his graduate studies in CityU’s SCM in 2003. He is expected to graduate with a PhD this year. “Studying at CityU has given me the precious opportunity to apply my engineering knowledge to the development of media technology,” he said.