The Works of Gao Made on display at CityU Gallery 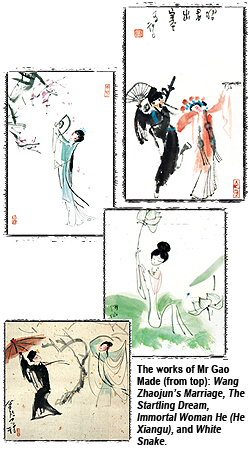 The Chinese Civilisation Centre at City University of Hong Kong (CityU) is holding an exhibition entitled “The Works of Gao Made”, which runs till the end of October. The exhibition displays for the first time in Hong Kong more than 50 paintings of Chinese opera characters by the artist.

The exhibition exemplifies CityU's commitment to promoting Chinese culture and traditional art among staff, students and the general public.

Mr Gao Made (b. 1919) is renowned for his depiction of Chinese opera characters. Largely self-taught, he is influenced by famous Chinese cartoonists such as Mr Ye Qianyu (1907 - 1995). During World War II, Mr Gao was editor of the privately-run Guomin Huabao in Guizhou. After the war, he joined the National Cartoonists Association and took up the posts of editor for Sunday Cartoons on the Shangwu Daily in Chongqing and art editor on the Xinhua Daily in Jiangsu. Mr Gao, whose home city is Nanjing in Jiangsu province, was appointed as a professional painter for the Arts Academy in Jiangsu in 1980.

The exhibits showcase Mr Gao's unique style of blending the bold brush stroke commonly found in cartoon art with the delicate art of Chinese brush painting. He draws reference from characters and scenes in Chinese opera and incorporates his own free-style ink and wash stroke. 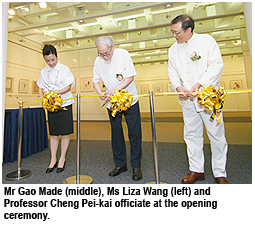 Paintings on display include Wang Zhaojun's Marriage, The Startling Dream, The Broken Bridge, Immortal Woman He (He Xiangu), and White Snake.

Professor Cheng said Mr Gao's paintings manifested the blending of traditional Chinese opera and the classical beauty of Chinese art, and his works contributed significantly to preserving famous scenes found in Chinese opera. By organizing this exhibition, CityU hopes viewers will have a chance to immerse themselves in the artist's world of art and enhance their appreciation and understanding of Chinese culture as well as the artist's life and achievements. 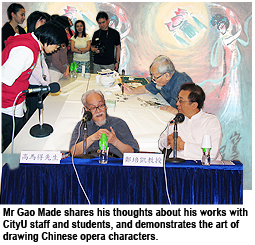 Professor Cheng thanked Mr Gao for officiating at the opening ceremony and providing CityU staff with the opportunity to appreciate his works.

Mr Gao gave a lecture on his works to CityU staff and students in the CCIV Audio-visual Room on 6 September.

"The Works of Gao Made" runs from 9 September to 30 October at the CityU Gallery, located on Level 6 of CityU's Amenities Building. Opening hours are from 10 am to 7 pm every day.