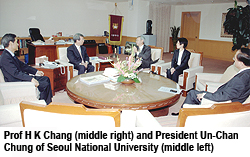 “Hong Kong cannot afford to know so little about its neighbours if it is to become the regional hub for higher education in the future,” said Professor H K Chang, University President. CityU can help by encouraging a bigger presence of these communities on campus and facilitating more CityU students to visit those countries, he said.

Hong Kong’s neighbours are making rapid progress in their socio-economic and cultural development, but these countries are not so well known or well represented in Hong Kong as their more developed counterparts. 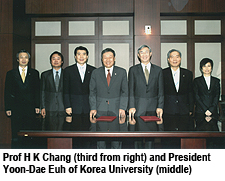 Professor Chang stressed that in its drive to pursue internationalization, usually by maintaining and increasing links with universities in the US, the UK, Canada, Australia, New Zealand, CityU should also pay attention to cultivating relationships and developing opportunities for student exchange with leading universities in neighbouring countries such as South Korea, Japan, the Philippines, Vietnam, Malaysia, Singapore, Indonesia, Thailand, India and Sri Lanka. 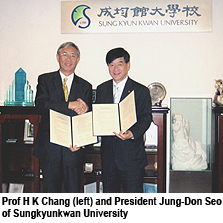 “If we can get a critical mass of students from these Asian countries to study at CityU, we can definitely help our students ,the future social leaders, to better understand the dynamics of these countries,” Professor Chang said.

To date, about 500 members of our academic staff have received doctoral degrees from the US, the UK, Canada, Australia and New Zealand, and the vast majority of CityU students who take part in exchange programs go to those countries to gain international exposure.

“But times are changing. We will see a very different world 30 years from now,” said Professor Chang, who has seen signs of growing prosperity among Hong Kong’s neighbouring countries and at the annual ASEAN “10+3” summit meetings that reflect an era of increasing collaboration in the region. “We should train students for the future and CityU has already cast its eyes on countries close to us, i.e. within four to five hours flight from Hong Kong.” 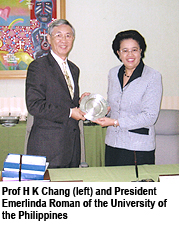 For example, the University took the pioneering step to establish the Southeast Asia Research Centre (SEARC) in 2000, and the Associate Director of SEARC, Dr Vivienne Wee, has been awarded a multi-million-dollar grant by the UK government to conduct a research project on women in Muslim communities. The new Department of Asian and International Studies (AIS), which is CityU’s proactive response to the internationalization agenda of the University Grants Committee, was launched in July, a move expected to highlight CityU’s increasing involvement with global and regional issues. 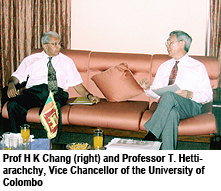 Malaysia, Nanyang Technological University in Singapore and Korea Advanced Institute of Science and Technology. “We are already heading in the right direction,” Professor Chang said.

“Hong Kong, both a part of China and the most internationally connected city in Asia, can aspire to be a leading exporter of knowledge in the region,” Professor Chang concluded. “CityU can help in this process by positioning itself in the vanguard of increasing interaction with the leading universities in the region.”