The journey to Starlite: the story of Lam Kwong-yu 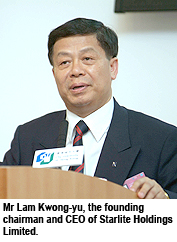 In a lecture entitled “Starlite Years,” Mr Lam Kwong-yu, the founding chairman and CEO of Starlite Holdings Limited, related the story of his success at a CEO Forum organized by the EMBA programme of CityU’s Faculty of Business on 17 August.

After the opening address by Professor H K Chang, CityU President, Mr Lam discussed how he transformed his business from a small factory with only one second-handed printing machine into today’s corporation, which reaches out around the world to do business. This story of entrepreneurially endeavour deeply impressed the audience of nearly 100 business students.

Founded in 1970 with business mainly engaged in paper packaging and printing, Starlite gradually expanded its business around the world, becoming publicly listed in 1993. Part of his success is due to the core values of authenticity, care, diligence and acumen that lie at the heart of his business.

“Authenticity should be the core value for doing business and making friends,” Mr Lam said. “To entrepreneurs, authenticity is everything. Therefore, there are eight items that I will never print.” They are: cigarette packets, pornographic publications, packaging materials for pirated products, publications promoting superstition, fake trade marks, false certificates, anti-religious propaganda materials and anti-government publications.

Mr Lam said a corporation should not only think about making money, but should also shoulder social responsibility. When asked how to balance shareholders’ interest with his principles, Mr Lam said a publicly-listed company should determine what type of business it wants to engage in. There were many other things to print besides cigarette packs, he said. 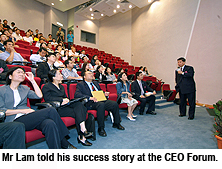 Despite these achievements, Starlite’s path to success has not been smooth. After being publicly listed, the company faced difficulties when its financial and human resources could not match its rapid diversification and internationalization. Between 1995 and 1999, Starlite hit an all-time low when its $1.95 share price plunged to $0.138.

But Mr Lam felt that closing the company would not only affect him and his family, but also his employees. So he secured bank loans against his personal properties to shore up his ailing company.

“During the darkest times, the employees devoted themselves to rescuing the company from its crisis,” Mr Lam said, actions which demonstrated great empathy and one of Mr Lam’s core values: care. Thanks to these efforts, Forbes ranked Starlite one of the 200 best publicly-listed companies in Asia in 2005, the year the Group celebrated its 35th anniversary.

Mr Lam is a diligent person: he is the first one in the office everyday and he studies hard, too. Even after becoming CEO of a multi-national group, he made time to earn an MBA degree in Asian Pacific Corporate Management from the National University of Singapore in 2003. When a student in the audience asked why Mr Lam chose to study in Singapore instead of at CityU, Professor Chang responded on behalf of Mr Lam, pointing out that “all roads lead to Rome”.

The world of printing needs advanced technology, so a successful factor is “acumen”. In the 1980s, when most local printing companies used offset printing machines imported from the US and Europe, Mr Lam introduced the most advanced printing system of the day, which came from Germany. He firmly believes that a corporation is doomed to fail unless it makes use of innovative technologies. Thus his company assumed a leading role in the industry and is now fully equipped with advanced systems at international standards. Mr Lam has also set up the Starlite Institute of Management to enhance the quality of his staff. 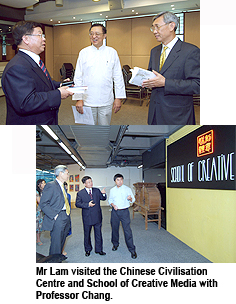 During a guided tour of the Chinese Civilisation Centre and School of Creative Media with Professor Chang before the Forum started, Mr Lam said he was impressed by CityU’s developments and achievements. Enthusiastic about education, Mr Lam not only makes donations to the education sector, he is also a member of the Council of Jinan University, a visiting professor at South China Normal University, a member of the Advising Committee of Business Programmes at Lingnan University, and an adjunct professor at CityU’s Faculty of Business.

Mr Lam has also been serving the community for several years as a member of the 10th National Committee of the Chinese People’s Political Consultative Conference, the Selection Committee for the First Government of the HKSAR, and Selection Committee for the Second Government of the HKSAR. He has been honoured with awards such as Hong Kong’s Ten Outstanding Young Persons in 1986, the Young Industrialist Awards of Hong Kong 1988, and the HKSAR Medal of Honour in 2002.