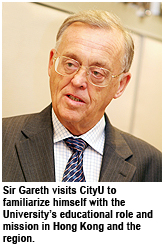 Sir Gareth was in Hong Kong to get a better understanding of the eight UGC-funded institutions and visited CityU on 20 July. He was accompanied by Mr Michael Stone, UGC Secretary-General.

A renowned scientist and education administrator, Sir Gareth is currently the President of Wolfson College, University of Oxford. He began his academic career at the University College of North Wales, Bangor, where he obtained a first-class honours degree in physics and a PhD in 1964. He has held Chairs at the New University of Ulster and the University of Durham.

In 1986 he was appointed to a Visiting Professorship in the Department of Engineering Science at Oxford and to a Fellowship at Brasenose College. He is the former Vice-Chancellor of the University of Sheffield.

At the session with Sir Gareth, Professor H K Chang, University President, offered an overview of CityU’s role and mission in Hong Kong and the region, pinpointing key moments in the University’s growth in terms of personnel, finances and campus development.

Professor Chang highlighted CityU’s geographical as well as conceptual role as the university at the heart of the city, pointing out plans underway to relieve the overcrowded campus such as the new Creative Media Centre, extra space for student hostels, the Community College of City University Building and the academic-administrative building for the new four-year curriculum.

CityU’s Mission Statement was clearly set forth since it was aligned with the Role Statement given by the UGC in 2003, Professor Chang explained, which was to provide professional education and pursue applied research. These goals were being realized by building closer links with mainland China and positioning CityU as a regional hub for quality tertiary education.

Professor David Tong Shuk-yin, Deputy President, introduced the key features of CityU’s academic set up, emphasizing the University’s achievements in a variety of international ranking exercises that have raised CityU’s profile on the international arena. CityU is currently placed 178th in the global rankings by the Times Higher Education Supplement.

His presentation was followed by a summary of CityU’s learning environment by Professor Richard Ho Yan-ki, Vice-President for Undergraduate Education, which reemphasized the professionally-oriented, internationally competitive programmes at CityU that focused on transforming students into professionals. 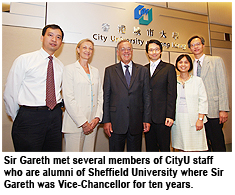 learning materials into a single platform using Blackboard plus CityU’s commitment to leadership development, mentorship in learning and cultural awareness.

Next Professor Roderick Wong Sue-cheun, Vice-President for Research and Dean of Graduate Studies, cited CityU’s many achievement in research in the form of Best Paper Awards, international prizes and unique contributions to a range of vital fields of study such as wireless antenna in the Wireless Communications Research Centre, the TeleEye project, the $45m grant to the Centre for Marine Environmental Research and Innovative Technology, and the Centa-City Property Index, which tracks property prices in Hong Kong.

Sir Gareth was then offered a flavour of the kinds of applied research conducted at CityU through Dr Andy Chun Hon-wai, Associate Professor in the Department of Computer Science, on his award-winning applications of artificial intelligence systems to improve scheduling and logistics in major public transportation outlets such as the Mass Transit Railway and the Chek Lap Kok Airport.

Next to speak was Professor (Chair) Ron Hui Shu-yuen of the Department of Electronic Engineering, who presented his energy-saving applications of novel dimmable lighting technology for mass lighting systems, such as road lighting and underground car parks, plus his wireless charging platform that provides a one-stop charging system for handheld portable electronic devices.

Last but not least, Professor (Chair) Lee Shuit-tong of the Department of Physics and Materials Science described the work undertaken in his Department and the Centre of Super-Diamond and Advanced Films in the field of nanotechnology, nanomaterials and Organic Light-Emitting Devices.

Sir Gareth spent time chatting with CityU members of staff who studied at the University of Sheffield, and he expressed his thanks for all the hard work CityU colleagues had put into preparing the presentations.