The Deans of the School of Law of City University of Hong Kong (CityU) and the Law Faculty of the renowned Hebrew University of Jerusalem have reached a consensus on offering joint LLM (Master of Laws) programmes. These programmes will provide students with an international edge to their legal education. 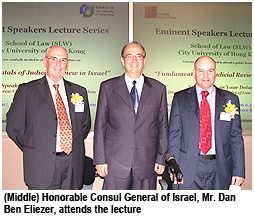 The two sides reached an understanding when Professor Yoav Dotan, Dean of Hebrew University’s Faculty of Law, visited CityU last week in response to a visit to Jerusalem earlier this year by Professor (Chair) Peter Malanczuk, Dean; and Mr Hans Mahncke, Assistant Professor; of CityU’s School of Law. Professor Dotan was also invited to give an Eminent Speaker Lecture entitled “The Fundamentals of Judicial Review in Israel” to an audience that included CityU staff and students and Israel's Consul-General Mr Dan Ben-Eliezer in Hong Kong.

“In order to better adapt to the needs of the increasing globalization of legal education, we have fostered a number of links with overseas and mainland institutions in the form of staff exchanges, joint research and teaching programmes, as well as co-sponsorship of conferences and symposia,” Professor Malanczuk said. 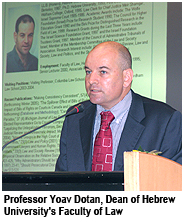 “By developing this partnership with one of Israel's oldest, largest and most important institutes of higher learning and research, we can provide more international opportunities for students who wish to practice in a truly global field after graduation,” he added.

Professor Malanczuk said he was delighted with the new arrangement with Hebrew University. “This cooperation is unique for Hong Kong, the gateway into China, as well as for Israel since Israel bridges two important regions and cultures in the world. This new mode of delivering postgraduate programmes will offer greater legal specialization and more interdisciplinary studies, all of which will enhance the legal capabilities of our students and the students of Hebrew University, preparing them for the global challenges ahead,” Professor Malanczuk said.

In addition to seeking collaboration with overseas institutions, the School of Law is forming partnerships with professional bodies such as the Hong Kong Institute of Arbitrators (HKIArb) with which the School entered into a Memorandum of Cooperation on 29 June.

Speaking at the signing ceremony, Professor Malanczuk said the MAArbDR programme had acquired a reputation of excellence in Hong Kong and internationally since it was established in 1991. The Straus Institute for Dispute Resolution at Pepperdine University (California), ranked #1 in the US in this field, runs the mediation training section of this programme and Hong Kong’s most prominent arbitration and dispute resolution experts teach on it.

HKIArb was established in September 1996 as a non-profit charitable organization for the training of and setting up of appropriate standards of conduct for arbitrators and mediators in Hong Kong. The Institute has more than 750 members and develops ties with similar groups involved in arbitration and alternative methods of dispute resolution on mainland China and other parts of Asia.