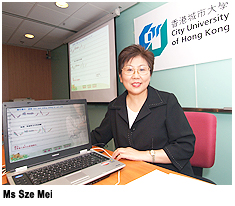 Starting from mid June, all primary and secondary school children in Hong Kong can benefit from a web-based multimedia interactive course for self-learning of Putonghua developed by City University of Hong Kong (CityU). The course is the direct application of CityU's ground-breaking computer-aided Putonghua self-learning software which deploys tone graph technology to enhance the learners' pronunciation.

The key feature of the course is the tone graph software which enables learners to compare their spoken Putonghua with that of their teacher by studying visual tone graphs displayed on a screen. The graphs present a visual rendition of spoken Putonghua, allowing students and teachers to compare their tones. This visual approach complements traditional teaching methods that rely primarily on hearing and speaking. The tone graph software is the first of its kind employed in learning Putonghua in Chinese-speaking communities.

"The tone graphs help explain pronunciation problems experienced by students," said Ms Sze Mei, a lecturer in the Department of Chinese, Translation and Linguistics who developed the software and the course. A veteran Putonghua teacher, Ms Sze said that the tone graph exercise was particularly useful for helping Hong Kong learners produce accurate tones and stable and complete utterances. 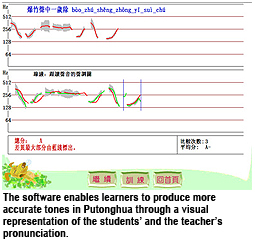 The aim of the course is to encourage teenagers to learn Putonghua outside classroom and share the University's language teaching expertise with the community-at-large. The course helps strengthen students' knowledge about the Putonghua phonology system and stimulates interest in learning through a variety of multimedia interactive exercises, such as read-and-sing, reciting poems, matching pinyin, tongue twisters, and many others. Students can use the tone graph exercises throughout the course, and scores and the number of exercises completed are recorded for assessment purposes.

Ms Sze received Teaching Development Grants from CityU in 2004 and 2005 to develop the software used for this course. In July 2005, the Education and Manpower Bureau gave its support to helping the project develop the software into a web-based instructional multimedia curriculum for primary and secondary school students.

CityU plans to unveil a new self-learning curriculum in September and will make the tone graph software available for CityU staff and students to improve their proficiency in Putonghua. In addition, the tone graph software project recently received another round of Teaching Development Grant support from CityU to develop a web-based talking dictionary which offers visual feedback on the learners' spoken Putonghua.

Management and web-based technology support for the course came from CityU's Technology Transfer Office (TTO) and the Centre of Innovative Applications of Internet and Multimedia Technologies (AIMtech Centre), respectively. The course is now available for primary and secondary school teachers from the HKEd City. Interested parties can apply for a user account from TTO.