Chairman and Chief Executive Officer of Phoenix Satellite Television (Phoenix) Mr Liu Changle shared his passion for business with EMBA students at the “Talk to China’s Business Leaders” forum at City University of Hong Kong (CityU) on 10 May. 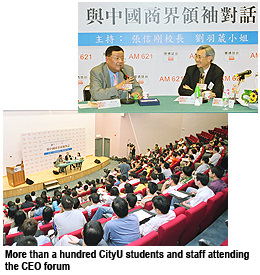 The forum, which consists of eight episodes, was co-organized by the Faculty of Business (FB) of CityU and the Putonghua Channel of Radio Television Hong Kong and aimed to provide EMBA students with a platform for exchange with renowned businessmen from China.

The one that looked into the leadership style and management culture at Phoenix was hosted by Professor H K Chang, CityU President, who was once a guest radio programme host on the Putonghua Channel. He asked Mr Liu about the philosophy behind running Phoenix and about how Phoenix could position itself as a Chinese-language broadcaster for Chinese-speaking communities all over the world. 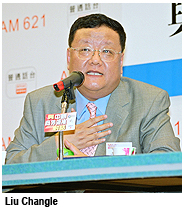 ten years, touching on areas such as management culture, corporate spirit, key challenges and future development of Phoenix to the ecology of Chinese-language media in the global Chinese community.

Regarding management style, Mr Liu said Phoenix drew on talent from Hong Kong, Taiwan and mainland China. “To build team spirit within a diverse group of colleagues, we need to exercise corporate management skills and adhere to the Chinese culture that emphasizes human relations. We have to let our colleagues see the benefit of their contributions and develop a better sense of job satisfaction,” he said.

Mr Liu also said it was necessary to make tough decisions during the formative years of the company because investment was huge. For example, to hire a satellite transmitter cost millions of US dollars a year. He was confident, though, because he could foresee the growing demand for Chinese-language TV programmes from the Chinese-speaking communities and the technological advances that lower costs.

Students attending the forum wanted to learn more about the source of Phoenix’s creativity, the reasons for certain TV programmes gaining popularity on the mainland, the future of TV media, and so forth. Mr Liu said Phoenix adopted a ‘people-oriented’ approach that meant it produced high-quality Chinese-language TV programmes on topics of common concern. He acknowledged the challenges caused by the localization of taste, protectionism within provinces and counties and the fierce market competition, but he said Phoenix would try to set foot in other Chinese communities such as Taiwan and develop new products such as phoenixtv.com to keep abreast of new trends in mobile media.

Now an Adjunct Professor in FB, Mr Liu is a well-known journalist on the mainland. Upon graduation from the Beijing Broadcasting Institute in the early 1980s, he joined the Central People's Radio Station where he worked as a reporter, news editor and commentator. He has been well-acclaimed for his news reporting style. He swapped journalism in 1988 for private business overseas, and in 1996 he formed a joint venture with News Corporation's STAR and established Phoenix.

The “Talk to China’s Business Leaders” forum is hosted by Ms Liu Yuwei from the Putonghua Channel, which will soon broadcast all the eight episodes as part of its radio programme.