On 12 May, City University of Hong Kong (CityU) conferred its first Distinguished Fellowships on two outstanding industrialists, Professor K B Chan and Mr Raymond Leung, in recognition of their significant contributions and support to the University and the education sector. 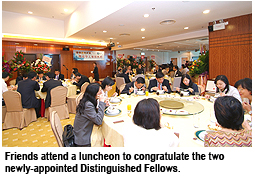 Professor H K Chang, President of CityU, officiated at the ceremony. In his speech, he congratulated the newly-appointed Distinguished Fellows and thanked them for their continuous support for CityU.

"As outstanding industrialists, Professor Chan and Mr Leung have the same mission as CityU, which is to promote connections between CityU and industry in order to nurture industrialists for the next generation. They both fully support the Industrial Attachment Scheme and Co-operative Education Scheme (CES) in FSE, initiatives that have already benefited over 1,500 students," Professor Chang said. 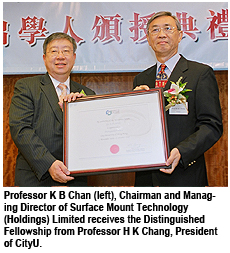 Professor Chan, Chairman and Managing Director of Surface Mount Technology (Holdings) Limited, has a long and distinguished record of public service, such as Chairman of HKEIA. Professor Chan was made an honorary citizen of Dongguan in recognition of his contributions to the city. On the academic side, Professor Chan is Chairman of the Electronic Engineering Departmental Advisory Committee, the Honorary Chairman of the Advisory Committee (Industry) for Co-operative Education Centre, and the Honorary Advisor for the FSE at CityU. In addition, he is on the committee of and advisor for several tertiary institutions in Hong Kong and mainland China.

Professor Chan received a first-class honours bachelor's degree in Electrical Engineering, a doctoral degree and an honorary fellowship from Queen Mary College, University of London, in 1968, 1972 and 1998, respectively. 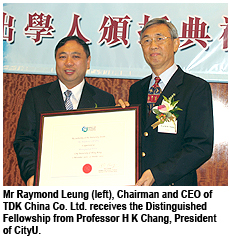 Mr Leung, Chairman and CEO of TDK China Co. Ltd., is the first non-Japanese Corporate Officer in TDK since the Company was founded in 1935. His hard work since the early 1980s has assured Hong Kong of its rightful place in the worldwide technology manufacturing arena. Mr Leung was made an honorary citizen of Dongguan in recognition of his contributions to the city. Mr Leung is the Honorary Chairman of the Advisory Committee (Industry) for Co-operative Education Centre, and the Chairman of Industrial Consortium in FSE. In addition, he is an advisor for several local tertiary institutions. Mr Leung is a Chartered Engineer and received his master's degree in Industrial Engineering from the University of Hong Kong.

Professor Chan and Mr Leung are long-term partners with CES and have offered many positions to CityU students over the years. The aim of CES, a 1-year placement programme for final-year students, is to provide concurrent education, integrating classroom learning with relevant job experience. 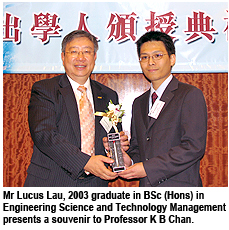 Mr Lucus Lau, 2003 graduate in BSc (Hons) in Engineering Science and Technology Management, participated in CES in his final year. He worked at the Dongguan subsidiary of Surface Mount Technology (Holdings) Limited. During his placement, Lucus learned a great deal about manufacturing management systems and had plenty of opportunities to improve and build upon his management skills. He worked well during this period and the company recruited him after he graduated and he is now working as a Project Engineer.

"I would like to take this chance to thank Professor Chan for helping me to get a job in mainland China. This opportunity has given me a lot of different experiences which will help me develop an ideal career," Lucus said.

Ms Hazel Yuen, a Year 3 student in BEng (Hons) Industrial Engineering and Engineering Management, is now on a CES placemen

t at SAE Magnetics (H.K.) Limited, a subsidiary of TDK. She said the placement was very useful and gave her the chance to apply her educational knowledge to the world of work.

"I would like to thank Mr Leung for giving me the opportunity to gain valuable work experience during my studies. I will cherish this opportunity to learn more about work and communications skills and seize this chance to go beyond the textbook," Hazel said.