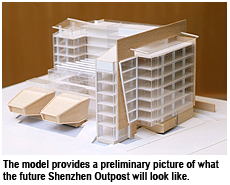 CityU’s Shenzhen Outpost, the base for applied research, incubation and teaching activities on the mainland, has received three major boosts in recent weeks, setting the project well on course for completion.

The Shenzhen Municipal People's Government has granted official approval for the project; Aedas, the firm of architectural consultants contracted to design the Outpost, has submitted a conceptual design; and the first tender for the project, which is the site investigation, has been received and falls within budget.

The 12,500 square metre Outpost, to be located in the Shenzhen Virtual University Science Park, signifies the University’s contribution to advancing the economic development of Hong Kong and the Pearl River Delta through R & D and quality education services.

“We are working according to the schedule and the project is going well,” said Mr James Ng, Executive Director of CityU Extension and Chairman of the Shenzhen Outpost Task Force. 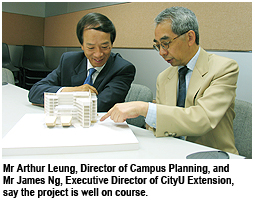 The preliminary conceptual design created by Aedas, an award-winning team of commercial architects with offices all over the world, promises an environmentally-friendly and aesthetically-pleasing building, explained Mr Arthur Leung, Director of Campus Planning and charged with overseeing the design and building of the Outpost.

“The overall design makes excellent use of space. Two of the lecture theatres are located above a small pond, creating an interesting feature of light and water reflecting off the building. The glazed Atrium captures the sun in the winter and shades are provided externally to cut off direct sunlight in the summer. And the building faces south, overlooking a green landscaped park,” Mr Leung said.

The initial design enables the construction of the Outpost to draw on the expertise of industry and technology from the mainland and Hong Kong. When the initial physical work begins, scheduled for next month when the drilling of the bore holes is set to start, locally produced materials and products will be used. At the same time, home-grown research technologies developed at CityU will also be incorporated. These include access control systems, management control systems, light weight concrete and a smart office system.

Mr Leung said the Outpost would provide a full range of facilities for the planned applied research, incubation and teaching activities. There will be three large lecture theatres, dry and wet labs, project offices, classrooms, an executive training centre and state-of-the-art amenities.

The geographic location of the Outpost is also a major plus for CityU, according to Mr Ng. Situated next to the exclusive residential and business district of Nam Shan, west of the central area of Shenzhen, the Outpost is close to Tsinghua University's Shenzhen campus and will be served by a mass transit railway scheduled to open in 2008. “It is also close to the proposed western corridor, a new road bridge linking Yuen Long with major cities west of Shenzhen, offering first-rate transportation and access,” Mr Ng said.

The Outpost has been built to comply with the mainland authorities’ stringent structural criteria for withstanding earthquakes and strong winds. There are also civil defence provisions which the building has to comply with.

The project is expected to be completed in early 2008.