CityU is dedicated to encouraging its creative media students to showcase their talent in international film festivals. AAFF is one of the most established and prestigious film festivals in North America that focuses especially on independent, experimental, and documentary work.

Sheetal’s award-winning film, Ordinary Lives, caught the attention of the judges with its exploration of the social, cultural, infrastructure and political issues that affect the lives of a family of ten living in a slum in Mumbai.

“This award has given me a lot more motivation to continue working in this field because my film has been appreciated by such a diverse audience,” Sheetal said. 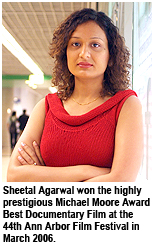 The award is all the more noteworthy because it is named after Michael Moore, the Academy Award-winning filmmaker and best-selling author. He shot Fahrenheit 9/11, the highest-grossing documentary film of all time. His other credits include Bowling for Columbine and Roger and Me. The proceeds of the latter fund the documentary award at AAFF.

Dr Fore spoke of Sheetal’s skill as a documentary producer. “She has this uncanny ability to get the subjects of her films to open up to her, to speak freely and honestly. And that leads to moments of genuine insight into the lives of these people,” he said.

Mr Tam said in her film Sheetal gave a personal and humanistic touch to an
exotic subject matter. “She possesses good visual sense in capturing her
subjects and reveals her respect and compassion for them through her lens,” he said.

Sheetal added: “The editing and the post-production process would have been impossible without Patrick Tam's guidance.”