The men's team from City University of Hong Kong (CityU) has won the overall championship in this year’s inter-collegiate sports competition for a record ninth time, while the women’s team have secured overall first runner-up.

Under the motto “Be the best that we can be,” CityU’s sports teams recorded outstanding results throughout the Hong Kong Post-Secondary Colleges Athletic Association (HKPSCAA) 2005-2006 season. Out of 19 events over a 19-week period, CityU men’s and women’s teams won the badminton, athletic, squash and basketball championships plus first runner-up in three events and second runner-up in three others. (See table below.) 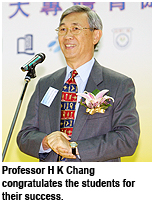 At the awards ceremony on 9 April, Professor H K Chang, HKPSCAA and CityU President, said sport nurtured the mind, body and spirit, and was essential for a fully-rounded education. “Although sport is restricted by limited resources in Hong Kong, our colleagues at all the universities here maintain a proactive approach to promoting physical education and sports. I would like to extend my heartfelt thanks to them for enhancing the quality of student athletes,” Professor Chang said.

He went on to say that he was impressed by the levels of will power and sportsmanship found among the student athletes during the competition. He said he was also very pleased by the students’ outstanding achievements in 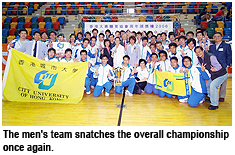 Mrs Dorothy Davies, Associate Director of Student Development Services (Physical Education), said she was proud of the outstanding performances by the CityU sports team over the past 11 years.

“The university is committed to promoting physical education and sports. Apart from skills training, we stress whole-person development aimed at enhancing students’ well-being and perseverance, so that they can attain personal excellence and lead a fulfilling life,” she said.

Mr Chow Wai-kin, a Year 2 student taking an associate degree in Applied Chinese Studies in the Division of Language Studies at CityU's Community College and the vice-captain of the track and field team, said the quality of his team had improved a lot since last year.

“In addition to the usual practice, we received additional training from the coach prior to the competition. We also attended many social activities outside training, which helped us to get to know each other better. I believe this is the reason we did so well this year,” he said.