A trip back in time with Professor Chang

The President of City University of Hong Kong (CityU) led students, teachers and members of the public on a tour of the world as it was 600 years ago in a talk that encompassed the political, economic and cultural conditions of Asia, North Africa and Europe during the early part of the 15th century.

Professor Chang’s talk, entitled “The world when Zheng He roamed the seas,” was part of a series of Chinese Civilisation Centre lectures and attracted an audience of nearly 200 on 30 March.

In the past, the Chinese have learned a Eurocentric history of world civilization, but Professor Chang’s talk adopted a neutral perspective and led to a more objective understanding of what the world was like more than half a millennia ago.

Rather than focusing on Zheng He himself, the two-hour talk took as its starting point the state of the world when the Chinese seafarer Zheng He conducted his seven epic voyages around the globe between 1405 and 1433. Imagining himself as a tourist in a hot-air balloon, Professor Chang described a journey from China to Korea, Vietnam, Japan, the Philippines and so on, covering more then 20 countries across four continents and using more than 60 ancient maps, paintings and photographs.

“China in the early years of the Ming dynasty was unquestionably the world’s foremost power, whether in terms of technology in agriculture and industry, trade, the standard of living in the city and the countryside, culture or military power,” Professor Chang said. He made reference to a Ming painting to demonstrate material affluence and high culture at that time.

When Professor Chang’s journey reached Central Asia, he introduced Persian art and Zheng He’s family history. He was originally a Muslim surnamed Ma. Both his father and grandfather had visited Mecca. His crews were also predominantly Muslim.

“Six generations ago, Zheng He’s ancestors came from Central Asia and settled in China. Zheng later went to Central Asia as a diplomat at the Emperor’s behest. It was certainly an interesting story,” Professor Chang said. 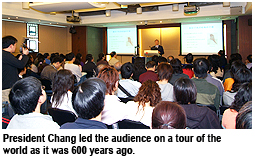 The era of Zheng He was a crucial one in the development of ideas about historical development. A few years before Zheng’s explorations, the Egyptian historian Ibn Khaldun (1332-1406) was lecturing and writing in Cairo about human civilizations, proposing a theory that all civilizations and dynasties had a cyclical rise and fall.

“This cyclical view of history was to influence the 20th century historian Toynbee, leading him to conclude that the 21st century should belong to the Asian people of the Asia-Pacific region,” Professor Chang said.

“When one considers the development of humanity as a whole, China is an example of an early-maturing model of monarchy,” Professor Chang concluded. He pointed out that in the 2nd century BCE, China had already begun an unbroken system of absolute monarchy. But in countries such as England, France, Spain and Portugal, an absolute monarchy had only just emerged during the period of Zheng He’s voyages.

“Whilst Zheng He’s voyages were an unprecedented achievement, to the world as a whole they seem rather a low-key affair,” Professor Chang said. “They didn’t have the same impact as Genghis Khan’s western conquests or the discoveries of Columbus. Nevertheless, Zheng He should be remembered, as a pioneering navigator and outstanding diplomat.”

The audience responded positively to the talk. One student said she attended the talk in part because Professor Chang’s background as an engineer. “I guess Professor Chang has a fresh perspective on history and culture because of his academic training,” she said. 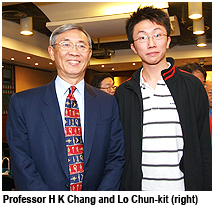 Ms Yiu Suk-yee, a Year 2 student from the School of Creative Media, said she had assumed the talk would focus on Zheng He, but was interested to find out the scope of the lecture was wider.

“We could see that the President put so much effort into this talk and the many wonderful pictures illustrated the talk very well. This shows that the depth of the President’s cultural and artistic interests,” Suk-yee said.

Mr Lo Chun-kit, a Year 1 student from the Department of Information System, said he learnt a great deal from the talk. “In the past, when we studied history, we only focused on a specific theme and area, and only learned about the materials provided by text books. But this lecture showed us how to look at history in a more refreshing way.”