At the forefront of drug discovery and development 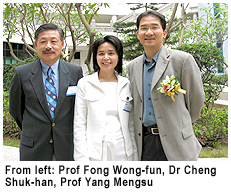 Three researchers from the Department of Biology and Chemistry at City University of Hong Kong have introduced the latest findings of their research into drug discovery and development.

The forum demonstrates that CityU is making valuable contributions to the field of biotechnology research in Hong Kong. The aims of the event, which was organized by CityU’s Technology Transfer Office (TTO), were to promote biotechnology projects currently underway at CityU and create a platform for communication between industry and the University. 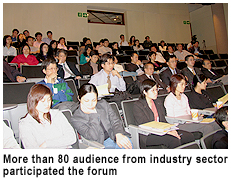 During the forum Professor Yang Mengsu said he had discovered a novel platinum-based drug that inhibits the growth of tumors. He noted that cells do not appear to build up any resistance to his anti-tumor treatment, a problem common with other drugs, such as cisplatin, used to fight cancer.

Professor Yang, a founder of Genetel Pharmaceuticals Ltd, a CityU subsidiary, also discussed the DNA chip technology that he has produced for testing for cancer. Professor Yang has published over 100 academic papers in international professional journals and owns 12 patents in the US and China in the field of biotechnology.

During her talk, Dr Cheng, an expert in molecular toxicity and developmental biology, introduced a unique test for screening drugs and testing for toxicity in the environment. She said her work had procured new insights into the treatment of cardiovascular disease and cancer.

Zebrafish embryos play an important role in her work. According to the US National Institutes of Health , the reaction of zebrafish to drugs is similar to that of mammals; and zebrafish are cheaper to use than rats, a commonly used animal in vivisection. Dr Cheng said she used zebrafish to test whether certain Chinese herbs can induce or inhibit the formation of new blood vessels. 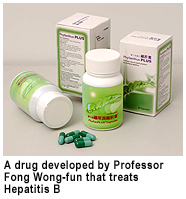 In his talk, Professor Fong Wang-fun, an expert in the molecular biology of cancer cells, biotechnology, cancer medication and herbal drugs, discussed his findings on combining Chinese and western drugs to combat cancer. Professor Fong’s past research has helped generate PhyllanPLUS, a Hepatitis B drug developed after several years of clinical trials with mainland universities. 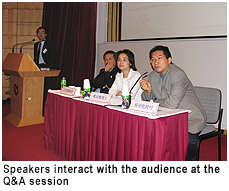 More than 150 members of the CityU Business & Industrial Club (CUBIC), which is organized by TTO, attended the forum. The Club fosters links between the University and industry.