They won nine of the 20 prizes awarded at a ceremony on 25 March, indicating th

e extent to which whole-person education, creativity and the use of language epitomize the University community.

The Festival, which drew to a close this week, attracted a great response from student writers at tertiary institutions in Hong Kong and Macao. Altogether nearly 200 literary works were submitted.

Mr Cheung Chun-yu, of CityU, won in the non-fiction prose category. He said a kind of “innocence” lay at the heart of literary creativity. “My purpose in writing was simple. Look up, look high, look afar, not only at myself but at things around me,” he said.

Mr Chau Man-lut, of the Chinese University of Hong Kong (CUHK), won in the short stories category. He thanked his mother and the adjudicators for all their help and support. “This award will definitely encourage me to continue writing,” he said.

Mr Lo Keng-chi, of the University of Hong Kong (HKU), won in the poetry category. He thanked the organizers for giving him the chance to realize his creativity. “Literature allows people to express their unique voice, experience and thoughts,” he said.

Professor H K Chang, University President, said he was excited by the expansion of the writing competition. “CityU is located in the city, it belongs to the city and it contributes to the city, and since the city is where culture and creativity thrives, CityU is the best choice for organizing the City Literary Award,” Professor Chang said.

Professor Cheng Pei-kai, Director of the

“I would also like to thank the Macau Foundation for its generous support,” Professor Cheng said. “The enthusiastic response of the students to the Festival has been heartening, and we look forward to long-term collaborations with these cultural organizations to further promote literature and groom talented young writers.” 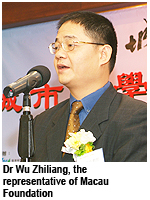 Dr Wu Zhiliang, representing the Macau Foundation, said it was strongly committed to supporting Chinese literary writing. “We are pleased to sponsor this important event and to experience the passion of creative writing,” he said.

The Festival started as a writing competition at CityU seven years ago. CityU expanded the 2006 event into a Hong Kong-Macao literary festival in the hope of enhancing interest in Chinese literary writing among younger generations and developing literary talent.

The competition attracted 88 entries for non-fiction prose, 46 short stories, and 56 poems. Approximately 85% of the entrants came from Hong Kong tertiary institutions and 15% from Macao. In addition to CityU’s nine prizes, the other prize winners were CUHK (four); HKU (three); Hong Kong Baptist University (two); and Macao University of Science and Technology (two).