Nobel Laureate in Physics to give lecture at CityU

Nobel Laureate Professor Claude Cohen-Tannoudji will give a lecture entitled “Manipulating Atoms with light: Achievements and Perspectives” on 1 March as part of the high-profile France - Hong Kong Distinguished Lecture Series co-organized by the French Academy of Sciences, Consulate General of France in Hong Kong, and City University of Hong Kong (CityU).

In the lecture to be officiated by Professor H K Chang, CityU President, and Mr Jean-Pierre Thébault, Consul General of France, Professor Cohen-Tannoudji will discuss the spectacular progress achieved in the manipulation of atoms by light and the new perspectives recently opened in this field. 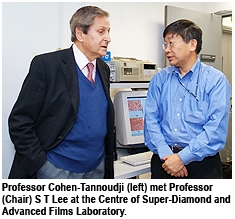 Professor Cohen-Tannoudji, 1997 Nobel Laureate in Physics, has been Professor of Atomic and Molecular Physics at the Collège of France in Paris since 1973. He is a Member of the French Academy of Sciences and a Foreign Member of many academies, including the US National Academy of Sciences and the Russian Academy of Sciences. In addition to the Nobel Prize, he has received many prestigious distinctions, among which are the Gold Medal of the Centre National de la Recherche Scientifique in 1964, the Research Award from the Alexander von Humboldt Foundation in 1991, and the Harvey Prize in Science and Technology from Technion Israël Institute of Technology in 1996. 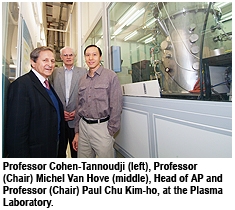 Professor Cohen-Tannoudji visited CityU on 27 February and met the senior management and staff to find out more about the University’s vision and achievements in applied research. He took the opportunity to tour the Plasma Laboratory and the Centre of Super-Diamond and Advanced Films Laboratory (COSDAF) in the Department of Physics and Materials Science, and was impressed by the University’s endeavours to achieve synergism between education and research encompassing both physics and materials science.

Professor Philippe Ciarlet, a Member of the French Academy of Sciences and Professor (Chair) of CityU's Department of Mathematics, said he was delighted to see closer ties being forged between the Academy and CityU. “Last year, we had in the same series Philippe Kourilsky, then President of the Pasteur Institute in Paris and a Member of the Academy, and this year we invited Professor Cohen-Tannoudji. By cultivating such high-profile links between the Academy and CityU, we can share expertise and knowledge among distinguished scholars. The exchange will be highly beneficial to both institutions,” Professor Ciarlet said.

All staff and students are welcome to attend the lecture which starts at 4:30 pm on 1 March in the Multi-Media Conference Room, Cheng Yick-chi Building.