The Faculty of Business (FB) at CityU is organizing a two-day exhibition called “Global Voyage 2006” from 22 to 23 February to support the University’s drive to nurture a more internationalized campus. The exhibition consists of booth displays, cultural performances and games that allow local students to have a taste of the world’s rich cultural diversity. 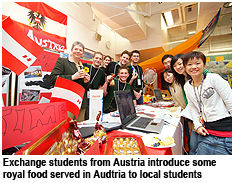 CityU recruited more than 250 exchange students from 23 countries in 2005 - 2006, and “Global Voyage 2006”, under the theme We fly you around the world, is one of several cultural activities organized by CityU to facilitate exchanges between local and non-local students. The exhibition hall, decorated like the departures hall of an international airport, contains eight booths that will showcase the music, language, traditions and history of 15 countries. Food tasting is also on the menu: Tom Yum, a kind of Thai soup; green curry; royal food served in Austria; Korean rice cakes; and Malaysian snacks.

In his welcoming speech, Professor Tong said the main context for the two-day event was the internationalization drive to which CityU has long been committed. “I am very impressed by the exchange students from the Faculty of Business who have already been on their exchange trips. Their commitment and contributions upon their return to CityU is living testimony to the life-long benefits that they have acquired from their experiences overseas,” Professor Tong said. 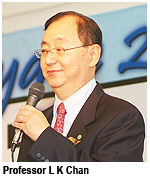 Professor Chan said FB now had over 70 exchange partners in 23 countries spread over six continents, giving students a diverse range of choices and opportunities. “To show our commitment to the internationalization of education, a large amount of money has been earmarked to support initiatives which promote internationalization. As we continue to expand, we aim by the end of three years to enable 50% of our students to go overseas to broaden their international exposure and experience,” Professor Chan said.

“Global Voyage 2006” is sponsored by the Office of the Dean of Student Learning. It is the first cultural activity that FB has organized for all exchange students and local students in the CityU community. Participating students include 48 exchange students, 15 FB students that comprise the Exchange Student Club, and more than 150 students in other faculties, 42 of whom have been on overseas exchanges.

Angel Chan and Joseph Li, Year 3 students in the FB, work as the External Vice-President and Public Relations Secretary for the Exchange Student Club, respectively, helping participating students to organize “Global Voyage 2006”. They both agree that working with exchange students is a memorable experience.

“I participated in a similar activity when I was on an exchange in Germany,” Joseph said. “So now I am involved in the preparation for the CityU event and I’m more devoted and have a deeper feeling towards the event. In addition, my communication skills have improved.”

Johanna Hirscher, a Year 4 student at the University of Mannheim in Germany majoring in Business Administration, is spending two semesters at CityU on a German Academic Exchange Service scholarship. She said CityU was a renowned university that encouraged academic growth. “I have gained a great deal of diverse learning experiences by taking part in student activities organized by the Student Development Services and other societies on campus,” Johanna said.