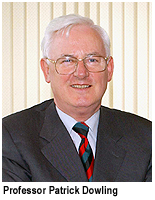 Professor Patrick Dowling, former Vice-Chancellor and Chief Executive of the University of Surrey (UniS), UK, will give a talk entitled “The road to a first-class applied research university” on 17 February as part of the Distinguished Lecture Series organized by City University of Hong Kong (CityU).

The theme of Professor Dowling’s lecture reflects CityU’s commitment to achieving excellence in applied research and providing students with a professional education.

UniS is at the vanguard of the UK’s tertiary education. It has positioned itself as a research-led university and a leading enterprise university with highly productive relationships with industry and commerce. Aligned along an axis that links professional education with applied research, CityU is on par with UniS in terms of direction and scholarly achievements. CityU considers UniS as its benchmark.

A visit to UniS in April 2005 by a delegation led by Professor H K Chang, CityU President, brought about this lecture. Professor Chang and other CityU staff also visited a number of universities in Denmark, Sweden, Norway and the Netherlands in an effort to expand CityU’s academic ties and exchange programmes with tertiary education institutions in Europe. The delegation received a warm welcome from Professor Dowling and gained a deeper understanding of UniS through the visit.

Professor Dowling is a Fellow and Vice-President of the Royal Academy of Engineering, a Fellow of the Royal Society and a Former President of the Institution of Structural Engineers. He recently accepted the position of Chair of the British Association for the Advancement of Science. In 2001 he was honoured with a Commander of the British Empire for his role in strengthening the links between higher education and industry.

During his visit to CityU, Professor Dowling will meet senior management and staff to find out more about the University, its role in education and the overall scope of applied research here. He will also tour the Wireless Communications Research Centre and the School of Creative Media.

All staff and students are welcome to attend the lecture which starts at 11am on 17 February at the Wei Hing Theatre.