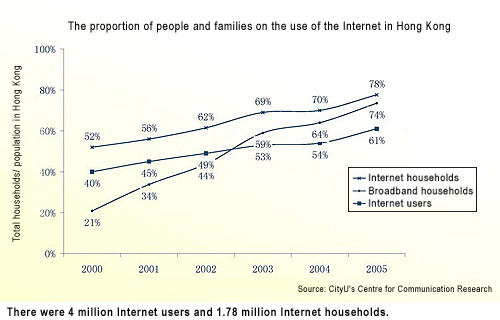 A study by 's Centre for Communication Research (CCR) on the use of the Internet in shows that local Internet users receive on average 58 junk mails per week, 11 more than that of 2004 and double the number of emails received. The research also reveals that despite the rapid growth of Broadband subscribers, on-line shopping is picking up slowly.

A telephone survey was conducted among 1,187 people aged between 18 and 74 on random sampling, the sixth such attempt since CityU launched the territory-wide research on the use of the Internet in 2000. The exercises exemplify the university's continuing efforts to make valuable contributions to society by providing quality applied research.

The latest research covered the growth in Internet households and user population, users' habits such as on-line shopping, the time spent on-line and surfing advertisements, and the reasons for those who do not use the Internet.

The survey reveals that Internet users made up more than 60% of the local population, up from 40% in 2000. Of them, 92% used broadband services. The number of families using broadband also rose from 40%to 94%, putting the territory in a leading position in both Asia-Pacific and worldwide.

Professor Jonathan Zhu of the CCR, who undertook the research, said, "In the past five years, there has not been much change in when and where people go on-line and the content. This shows that the Internet development has matured in ."

He also pointed out that despite the popularity of the broadband, wireless services and on-line shopping are still developing slowly here. The use of wireless services went up slightly from 4% in 2000 to 9% in 2005. In these six surveys, on-line purchases remained low at 10% to 20%. The users mainly booked movie, soccer match tickets and books, and few of them bought household appliances and consumer goods.

The survey also shows that users on average received 85 emails a week, 58 of which were junk mails. And 38% of the users said they had lost their data due to virus' attacks on their computers; 5% said their personal data or computer account had been abused by others; and 1% said they had their credit card information stolen and used by others in making purchases. Professor Zhu said Internet security was an issue worthy of concern, though no catastrophic damage had been done yet.

On those who stayed away from the Internet, 50% said it was because they either did not have the knowledge to log on to the Internet or they had fear in using Internet technology; 20% said they lacked resources such as computers or telephone lines; another 10% said they did not have the time. Professor Zhu said the “digital divide” (the gaps between groups in their ability to use information and communications technologies effectively due to differing literacy and technical skills) was not caused by economic factors, but rather by people's knowledge base, social roles and lifestyles. To bridge the gap, he said that the government could allocate resources on teaching people how to go on line.