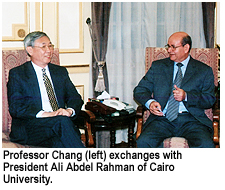 Professor H K Chang, University President, returned from a short academic exchange to Cairo University of Egypt earlier this month. The trip gave him the opportunity to learn about geographic, economic, religious, social and cultural aspects of the country.

Egypt, situated in the northeastern part of Africa, belongs to one of the four ancient civilizations and it is the most important country of the Arab world. Egyptian history and culture still have an immense impact on modern civilization.

During his exchange, Professor Chang met President Ali Abdel Rahman of Cairo University, and several senior members of faculty there. They introduced Professor Chang to several leading Egyptian intellectuals and scholars and the two universities expressed interest in developing future collaborations. The trip also provided Professor Chang with useful resources for his plan to launch a pioneering general education course, “Dialogue of Civilizations”, at CityU. 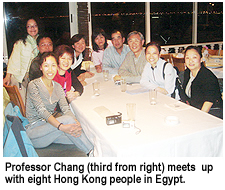 Professor Chang also found time to visit two other universities in Egypt during his trip, and he met up with eight people, among them three CityU alumni. They invited Professor Chang to dinner and the group had a good chat.

On the first day of 2006, Professor Chang shared with readers his thoughts and reflections on in an article in Chinese entitled “Rambling Thoughts Along the Nile River”, published in Ming Pao, a local newspaper. In his article, Professor Chang talked about his life experiences and philosophy, cultural reflections as well as his educational convictions. The CityU NewsCentre invites staff, students and the general public to read and appreciate the article. Please click here for the full text.