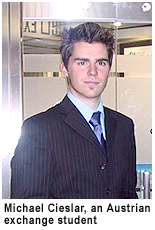 Mr Michael Cieslar and Mr Tan Chun Kiat, exchange students under the Internship Programme for Exchange Students (IPES) organized by the Co-operative Education Centre (CEC) under the Faculty of Science and Engineering (FSE), spent time as interns at two technology companies in .

IPES is a new initiative which started in January 2005, following the signing of the Memoranda of Understanding with overseas partner universities. It developed out of the Industrial Attachment Scheme (IAS), a scheme which gives FSE students placements and local training opportunities over the summer. The IAS has received a great deal of praise from employers since its inception and continues to attract more and more students. .

“Consistent with the University’s mission to promote internationalization and strengthen links with the industry, the Centre has taken a proactive role in establishing internship exchange programmes with overseas universities. I would like to see that the scope of overseas collaboration be further expanded,” said Professor (Chair) Paul Lam, Director of the CEC.

Mr Tan, a Year Three student who studied for a bachelor’s degree in Computer Engineering at in , started his six-month internship in July 2005 at MaCaPS International Limited (MaCaPS), a company engaged in the security and card technology business. 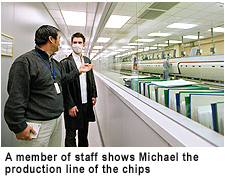 Mr Cieslar, who enters his fourth year of study majoring in Production and Management at Steyr University of Professional Education in , began his internship three months after Mr Tan. He has been placed at Compass Technology Company Limited (Compass) as an engineering trainee.

“I was impressed by the time management and work efficiency of offices in ,” he said.

Both students said their internships exposed them to the overall operation of the companies, enhanced their competitive edge in the global market and improved their 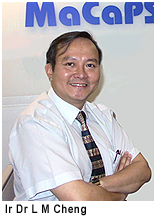 interpersonal skills. Mr Cieslar said it was particularly interesting to learn about the different culture and management style in ’s companies, compared to that of his homeland.

MaCaPS and Compass have given great support to the Faculty’s IPES and its related projects, such as the Co-operative Education Scheme (CES) and the Industrial Attachment Scheme (IAS), by providing CityU students with internship opportunities.

Ir Dr L M Cheng, CEO of MaCaPS, said participating in IPES enhanced the competitiveness of MaCaPS because the interns helped extend the company’s network to other regions, an important consideration given the inevitable trend of globalization.

“In addition to making money, the companies in our industry should allocate resources back to society to provide opportunities for talented engineering graduates to develop to their full potentials,” said Mr Chee Cheung, President and CEO of Compass.