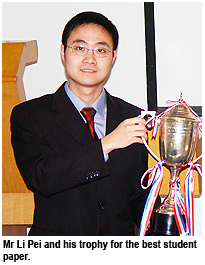 Li Pei, a PhD student in the Department of Electronic Engineering (EE) at CityU, won the best student paper award at the Asia Pacific Microwave Conference 2005 (APMC 2005) which was held from 4 to 7 December in Suzhou, China.

This recognition once again reveals EE’s strength in teaching and research and testifies to the outstanding performance of EE students.

Mr Li was delighted when contacted about his achievement. He said that the support of his supervisor, Professor (Chair) K M Luk, Head of EE, and fellow students was crucial to his success.

“My sincere thanks go to Professor Luk for his guidance and inspiring suggestions,” Mr Li added.

Mr Li was the champion in the postgraduate section of the IEEE Hong Kong Section Student Paper Contest in 2004. He obtained his bachelor’s degree in telecommunications and was awarded “Outstanding Student” at . His focus is on academic research in electromagnetism.

APMC's slogan - "Microwaves make people closer" - reflects the objective of the conference, which is the largest of its kind in the Asia-Pacific region. Its diverse and well-organized programme covered many of the most crucial topics in the microwaves field today.