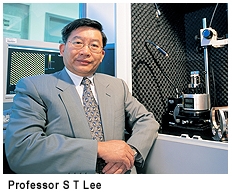 Chair Professor S T Lee of the Department of Physics and Materials Science at City University of Hong Kong (CityU) has been named an Academician of the prestigious Chinese Academy of Sciences (CAS) .

Professor Lee is the second distinguished researcher at CityU to join CAS as Academician: Professor David Tong, Deputy President, was elected in December 2001.  To date, there are a total of 10 members of national academies at CityU.

Professor Lee’s achievement once again illustrates CityU’s excellence in scientific research, as shown recently when CityU broke into the list of the top 100 technology universities worldwide in a recent ranking by The Times Higher Education Supplement.

Deputy President Professor Tong said that the election of a second CityU scholar as a CAS Academician would have a positive impact on teaching and learning at CityU.

“Professor Lee thoroughly deserves this recognition and the University is very proud of his achievement,” he said. “Having world-class scholars at CityU means we are providing a world-class education for our students.”

On hearing the news of his election to CAS, Professor Lee extended his gratitude to CityU where he has worked for 11 years. He said that his work was made possible by the University’s vision and commitment to research and he thanked his CityU colleagues and students for all their support and hard work.

“I would also like to give special thanks to my colleagues from the mainland for all their encouragement and collaboration,” he added.

Professor Lee has been nominated for his outstanding contributions to the fields of nanomaterials and nanoscience, nanodiamond and thin film technology, and organic electroluminscence. He is the Founding Director of the Centre of Super-Diamond and Advanced Films (COSDAF) at CityU and the Founding Director of the Nano-organic Photoelectronic Laboratory, the Technical Institute of Physics and Chemistry, CAS. He is Adjunct Professor at several universities in mainland , including , University, , , and of Science and Technology etc

After receiving his bachelor’s degree from the of Hong Kong, his master’s from the of and his PhD from the of , Professor Lee worked as a Research Fellow in the Department of Chemistry at the of and at the Lawrence Berkeley Laboratory at . In addition, he had worked at the Research Laboratories of Eastman Kodak Company in the before joining CityU in 1994.