Planned recruitment of mainland students to jump 13% next year 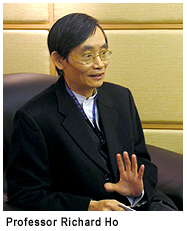 City University of Hong Kong, one of the first local participants in the National Joint College Entrance Examination Scheme (NJCEES), has already started preparations for the mainland student recruitment exercise for next year. Professor Richard Ho, Dean of Undergraduate Education, introduced the recruitment plan to the media on 25 November.

"Our aim is to recruit the best students," Professor Ho said, pointing out that CityU had three advantages in attracting outstanding mainland students. First, CityU is listed as one of the nation' foremost higher-education institutions alongside Peking University and Tsinghua University in the NJCEES. Second, with the concerted efforts of all students and staff, CityU enjoys an international reputation with a steady upward trend in the rankings of universities around the world. Third, CityU will continue to award scholarships but with a higher benchmark in order to recruit more outstanding students.

In this year's recruitment, Guangdong student Yu Guo was admitted to his first choice: the Faculty of Business (FB) at CityU. After studying at CityU for a few months, he is very happy with campus life. "CityU not only has sophisticated learning facilities but also a wide range of student activities," he said. "I feel even better about CityU than when I came here a few months ago." He is now very involved in his campus life: in addition to joining the University choir, he often shares his experience studying in the mainland with local students.

Two former students from Shanghai Jiao Tong University, Sally Sun and Vivian Jiang, came to study at CityU's FB in 2003 on a scholarship programme. In early November this year, they joined with local student Vivian Lam to participate in the first ever Finance Case Study Competition organized by the Association of International Accountants. They outperformed teams from top universities in the mainland, Macau and Hong Kong to clinch the championship.

Ms Sun said CityU had broadened her international horizons and provided her with first-hand experience of the local business sector. For example, she has had several opportunities to find out more about the day-to-day work of professional accountants and the operation of a commercial society through various projects and schemes. When she compared studying in Hong Kong with that in Shanghai, she said CityU had enriched her experience and greatly improved her interpersonal skills.

While mainland students are benefiting from studying at CityU, they also inspire local students. Ms Lam is more motivated to study since the collaboration in the accounting competition in November because she was deeply impressed by the conscientiousness and outstanding performance of the mainland students. "We learn from each other," she said. "I admire very much their attitude to learning. They are fast learners, too. Their Cantonese is getting much more fluent!"