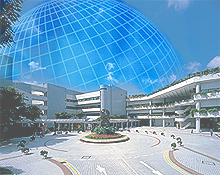 City of has shot up the rankings of the world’s most prestigious educational institutions, according to The Times Higher Education Supplement (THES).

The University leapt 20 places from 198th last year to 178th this year in the Times Higher Education 2005 World University Rankings released this week.

The THES findings confirm that CityU has attained international recognition in both teaching and research.

“This is a boost for us to have our excellence in teaching and research recognized again by the Times Higher Education Supplement,” said Professor H K Chang, CityU President.

“We are especially encouraged by the fact that CityU has leapt 20 places. We will continue to maintain our position as an outstanding university in the region,” Professor Chang said.

Professor Richard Ho, Dean of Undergraduate Education, said the results of the survey acknowledged CityU’s achievements in the past year.

“Being placed in the top 200 of the world’s top universities is clear recognition from the international academic community that CityU is one of the top four universities in . This is recognition of the marvelous achievements of all our colleagues over the years,” Professor Ho said.

The rankings are based on the results of a survey of 2,375 academics from across the world that combine peer review, the number of times research papers are cited by academics, staff-to-student ratios, the number of staff and students from overseas, and views from international employers.

CityU ranks among top 200 universities in the world