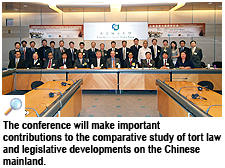 More than 60 eminent scholars and legal practitioners from mainland China and Hong Kong attended a conference on “Chinese and Comparative Tort Law Legislation” organized by the School of Law (SLW) at City University of Hong Kong from 27 to 28 October. 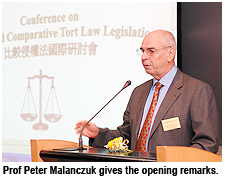 "The has a strong general interest in promoting comparative and international law scholarship," said Professor Peter Malanczuk, Dean of SLW. He said CityU maintained close links with many law schools in and that the University was committed to fostering greater understanding of the different legal systems and new legal developments in mainland and .

The conference would make important contributions to the comparative study of tort law and legislative developments in , Professor Malanczuk added.

Tort law is one of the most important components in civil and commercial law, and given that transactions between and the mainland are increasing, more issues relating to the law of torts are likely to rise over the next few years.

The conference offers a timely and comprehensive discussion on issues such as: system and structure of tort law in ; general theories and principles of tort taw; protection of the right to personality and personal safety in tort taw; liability for accidents and legal issues relating to special tortious behaviours.

Officiating guests on 27 October were Mr Steven Wong, Deputy Solicitor General of the Department of Justice, HKSAR, and Mr Peter Lo, President of the Law Society. After the

inaugural session, Professor Wang Liming, Dean of the of at , introduced the latest development of tort law legislation in .

Legal issues on bio-safety protection under the spotlight