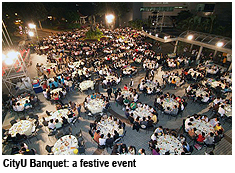 Speaking at the event, Sir Gordon praised CityU as an excellent university, having produced a lot of outstanding graduates over the last 20 years. 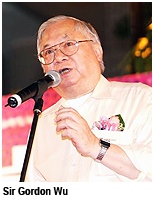 As the University has been taking in more and more students in recent years, Sir Gordon said campus expansion would be needed to ensure quality education.

"We need more campus space to make sure that our students and staff will continue to have a comfortable environment," he said.

In his speech delivered in Cantonese, English and Putonghua at the banquet, Professor Chang thanked Sir Gordon for his generous donation to the University on behalf of all the students and staff. 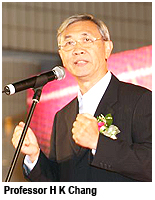 "CityU will be the greatest university that we ever want to see. In our lifetime, we will make City University of Hong Kong one of the greatest in this region of the world," Professor Chang said. "Of course, we need better facilities, we need more accommodation, we need a better environment for learning and teaching."

The President added that it was important and timely that Sir Gordon proposed  the University should carry out campus expansion.

The joyful and festive occasion also featured performances by students and staff members, laser shows and lucky draws. There was also a cake-cutting ceremony to mark the University Anniversary Day.

The Council in April this year designated 22 October, the day of the inaugural ceremony for City Polytechnic in 1984, as the University Anniversary Day. But because 22 October falls on a Saturday this year, and this is the first time the University has held a formal anniversary day, the University and the SU agreed to collaborate to make this year’s CityU Banquet a wider event.