CityU sets up new base in Suzhou 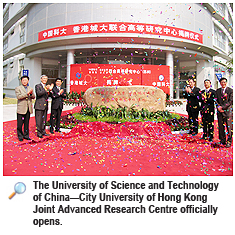 The newly established and Technology of China—City University of Hong Kong Joint Advanced Research Centre in was officially opened on 17 October. 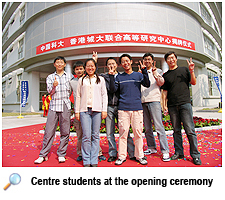 Honorable guests from the two universities, Suzhou Municipal People’s Government, , Dushu Lake Higher Education Town, and institutes in the participated in the opening ceremony and toured the Centre.

CityU and USTC signed an agreement on to set up the Joint Advanced Research Centre in USTC’s Suzhou Institute for Advanced Study, co-established by USTC and the Suzhou Municipal People’s Government, to further promote collaboration between the two universities.

The Centre has set up four joint doctorate programmes, and 43 postgraduate students who have completed their first-year course work at USTC are now studying in the Centre. They can apply for a doctorate awarded by CityU and USTC after completing their dissertation.

The presidents of the two universities and the representative of spoke about their expectations for the Centre’s future.

Professor Zhu Qingshi said that USTC’s strategy was to seek further expansion in while establishing itself in Province, where USTC is located.

“Both USTC and CityU aim at nurturing talents and contributing to society. The Centre will strive to give impetus in the development of the innovative high-tech industries of our country, especially in ,” he continued. 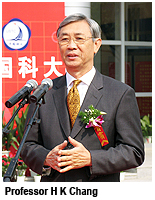 Professor H K Chang expressed his gratitude to USTC and the Suzhou Municipal People’s Government for their support. “Although CityU is located in , we embrace our motherland and reach out to the rest of the world. The future of and CityU depends largely on our close cooperation and integration with the mainland in the areas of economy, culture, society, science and technology, and education. Although we have been collaborating closely with the Pearl River Delta, our closest geographical ally , we will work as hard here as if here were our home. We will strive to contribute to our country’s renaissance and to fulfill our own aspirations,” Professor H K Chang said.

"To build an industrial park that is highly competitive internationally, we need the infrastructure of manufacturing and the help of internationally recognized institutes such as CityU and USTC. Their emphasis on the integration of industry, education and research will definitely play an important role in advancing . The and will give full support to ensuring the smooth operation and accelerated development of the Centre,” Mr Pan said. 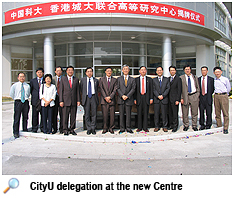 The Centre marks an important milestone in advancing CityU's research base in the Yangtze River Delta. It allows the two universities to work together on research projects, supervise and teach research students, and furnish professional training opportunities.

So far the Centre has set up four joint doctorate programmes: Web Services; Applied Mathematics; Knowledge and Innovation Management; and Control and Mechatronics. The Advanced Laboratory for Environmental Research and Technology and a new programme on the Distribution and Analysis of Multimedia Content in and Wireless Sensor Networks will be established next year.

Mr Chen Haoyao, a research student majoring in Control and Mechatronics, said that he hoped the joint programme would help him compete on the international stage. “My research interest is robots. It is an area that is better developed in some Western countries. I believe the training and opportunities that CityU provides will help me exchange ideas with foreign experts more easily,” he said.

Mr Chan said he was very impressed with CityU’s researchers in this area and the facilities and resources the Centre enjoys. “It’s an excellent environment for research,” he added.

Ms Pan Zhiwei, a research student majoring in Applied Mathematics, chose the joint programme to broaden her horizons and experience ’s approach to postgraduate study. “It is a new programme, and I’m sure there will be challenges,” she said. “But I believe that my potential can only be realized by such challenges.”