An initial sum of $20 million has been earmarked 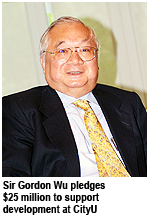 for the University’s campus development plan, which was unveiled in early October. This 10-year plan includes four major projects: the Creative Media Centre, the Community College of CityU Building, an academic-administrative building, and a tentatively called “short-fall academic building”.

The additional $5 million will be used to establish an on-campus matching fund to encourage CityU staff, alumni and students to raise funds for the University’s development.

“It is not the amount of donation that matters but everybody’s involvement in making small donations,” Sir Gordon said. “I believe CityU staff, alumni and students care deeply about our University, and their initiative and team spirit will help generate more community support,” he added.

Sir Gordon made specific reference to previous fundraising success stories, such as last year’s “Turn One to Five” campaign.

“I hope we can be as successful, if not more so, than before,” he said.

In terms of the on-campus matching fund, Sir Gordon said he would donate one dollar and fifty cents for every dollar donated by staff and students. This means that, together with the Government matching grant, each dollar raised will bring the University five dollars. The anticipated $10 million fund ($5 million from Sir Gordon and $5 million from the Government) will go towards providing student development services, including the On-campus Service-learning Scheme—a student training scheme to integrate work and learning on campus—job placements, student exchanges, scholarships and other student activities. 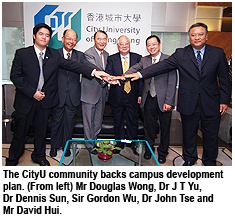 “The University will try its best to implement its campus development plan and call for support from society so as to provide an ideal learning environment and quality education to its students,” Dr Yu said.

Dr John Tse, Chairman of the Staff Association, expressed his gratitude to Sir
Gordon. He said the money would greatly assist the University’s plans to expand the campus.

Mr David Hui, Co-Chairman of CityU’s Alumni Donations Committee and one of the University’s key benefactors, said the Alumni Giving Club had raised nearly $5 million for the University since it was established in 2003. “Although the amount is not substantial, it helps facilitate a caring culture and strengthens a sense of belonging.”

Mr Douglas Wong, President of the Students’ Union (SU), said the SU was deeply impressed by donations to CityU. “This motivates us to participate in the fundraising campaign. We will unite the students to support the University,” Mr Wong said.

Sir Gordon added that it was now the best time to make donations since the second round of the Government matching grant was currently open for application. “The $25 million that I have contributed may turn into $50 million. By myself I have limited powers, so I hope other members of the University community will also help out,” he said.

In its relatively short history of 21 years, CityU had already achieved a great deal and contributed so much to society, he added.

“CityU deserves our donations. It is a university worth investing in,” he said.

In early October, Dr Dennis Sun, Chairman of the Community Relations Committee under the Council, unveiled the University’s 10-year campus development plan, and announced that four development projects, namely, the Creative Media Centre, the Community College of CityU Building, an academic-administrative building and a tentatively called “short-fall building” would be carried out to cater for an increasing student population and ease the University’s over-crowded campus.